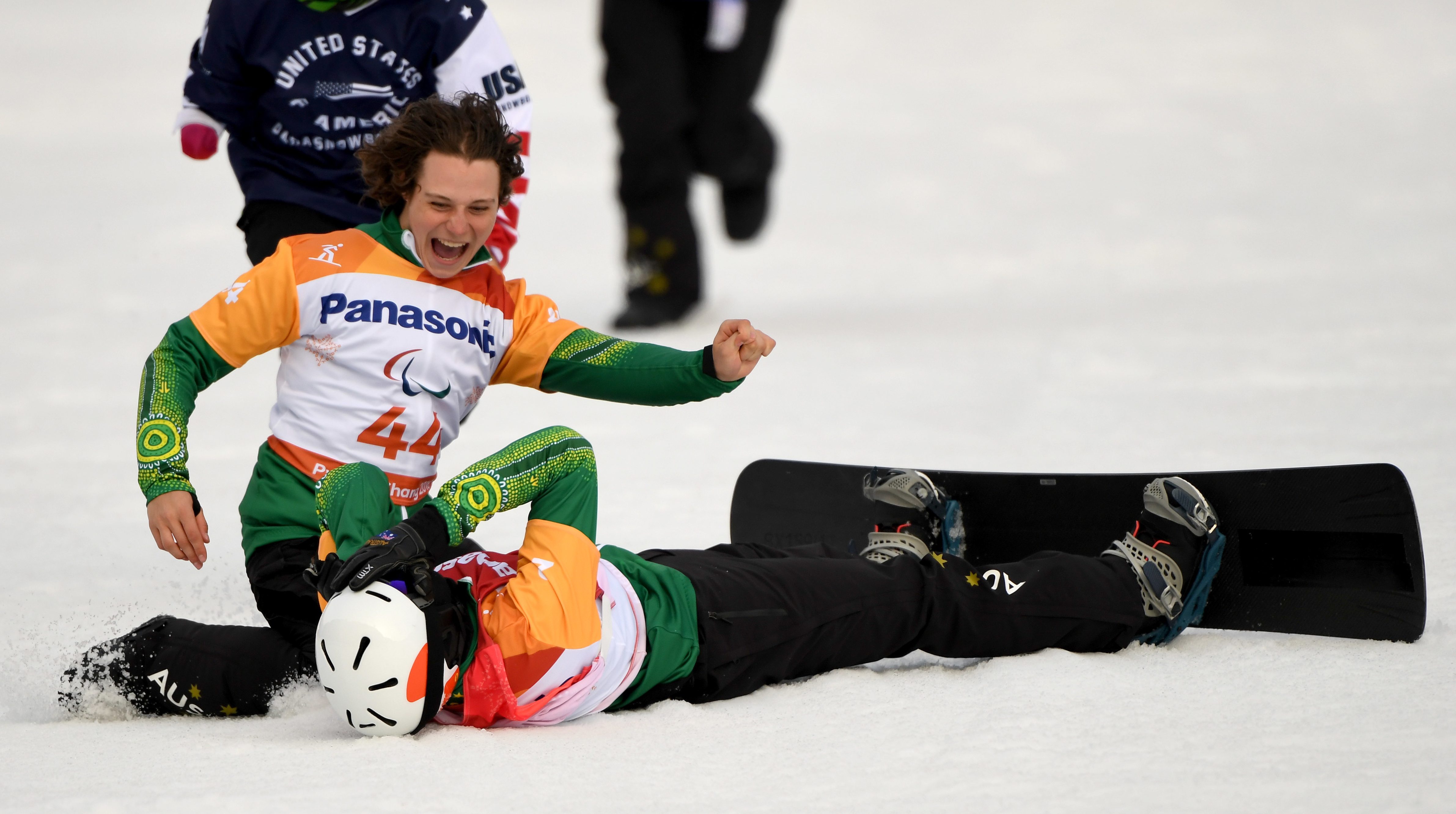 Australia’s newest gold medallist Simon Patmore would like to thank his Commonwealth Games and Summer Paralympics racing for helping him add a Paralympic winter medal to his collection.

The 30-year-old Queenslander’s previous life, before snowboarding at the PyeongChang 2018 Paralympic Winter Games, was as an international sprinter. He has the Delhi 2010 Commonwealth Games 100m T46 gold medal and the London 2012 Paralympic Games 200m T46 bronze to prove it.

Reflecting back on that eight year sporting journey and he can see how having those “big occasion” finals, helped him hold his nerve for his six races in PyeongChang to claim the men’s snowboard cross for his upper limb disability class. He has Erb’s palsy affecting his left arm.

“How I saw it was that I was the only Paralympic athlete in my category. No-one else had that experience,” Patmore said.

“So I’ve got some experience over all those guys… how people crack under pressure or do ridiculous stuff, say ridiculous stuff. I’ve watched these guys over three and-a-half years so I know what they’re going to do on the day.

“When they play stupid little games, I blocked it out and did my own thing… just stayed away from it.”

It also helps rubbing shoulder with Australia’s Olympic snowboarders, like Alex Pullin, Scotty James, Jarryd Hughes and others in the 12-member squad that raced in February in PyeongChang.

“Definitely. It’s a small community. We all know each other and congratulate each other. It’s team morale and that’s what I love about this sport,” Patmore said.

“Yes, it’s individual but we’ve turned it around and made it like a ‘group team’ sport.

“We’re all on the Australian team together, whether it’s Olympic or Paralympic. Those guys did a fantastic job and now it was time to do our job.”

Two others from Australia’s four-member snowboard squad in PyeongChang, Ben Tudhope and Sean Pollard, finished in the top-10 for their disability classes on Monday.

“It’s just amazing what we all can do on snow and while Australia isn’t a snow sports country we’ definitely on the radar. It’s just great to have good riders up there that can win,” said 18-year-old Tudhope

Patmore is not afraid to show his esteem for Tudhope and Pollard. They didn’t hold back either on Monday. When Patmore crossed the finish line in first place in the gold-medal race, they ran past the security guards and out onto the snow to jump all over their teammate in delight.

“I couldn’t have done this without having these guys… Joany (Badenhorst, injured) … all of them… every one of them.

“If I didn’t have these guys in my life over the three and bit years I’ve been snowboarding I wouldn’t have been this successful.”

“I started in 2014 and Lu started with the Para-snowboard program that year and he asked me straight up ‘Have you snowboarded before?’ and I lied to him.

“I knew straight away I couldn’t hold an edge. I was falling over at front valley of Perisher…”

Tudhope intervenes at this point: “He was following me!”

The pair embrace again in laughter – it’s a snowboarder thing.