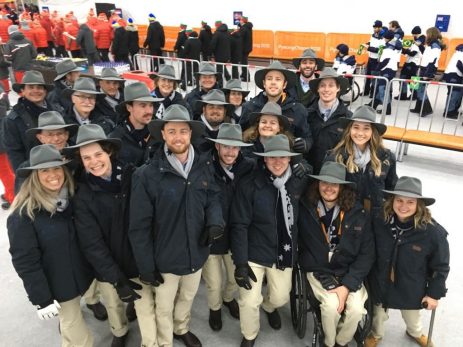 The Australian Paralympic Team won over the crowd at the PyeongChang 2018 Opening Ceremony crowd with their traditional stockmen’s outfits to add a touch of the outback to the Winter Games.

The open-air stadium, with a night-time temperature of -6 degrees Celsius, did not deter the smiles on the faces of Australian athletes.

While North Korea has participated in the last two Summer Games – London 2012 and Rio 2016 – PyeongChang 2018 is the first time the Democratic People’s Republic of Korea has entered a Winter Games.

And they marched under their own flag, separately from South Korea, and not as part of a unified team as in the Olympics last month.

Then the South Korean team was the last to emerge from the athletes tunnel to receive the biggest ovation of them all.

One other delegation of intense interest was the 30 athletes from Russia, who entered the stadium under the IPC flag as ‘Neutral Paralympic Athletes’. That was a condition of their participation laid down by the IPC on January 29 this year in the aftermath of the sanctions and bans placed on Russia following the state-sponsored doping at the Sochi 2014 Olympics and Paralympics.

The IPC also stipulated the 30 athletes had to undergo two random drug tests in the past six months, complete an anti-doping course, before being allowed to compete under NPA status at PyeongChang.

Before the cauldron was lit for a second time in 2018, three Korean athletes read the oath emphasising the message for a “clean” Games.

“In the name of all the competitors we promise that we shall take part in these Paralympic Games, respecting and abiding by the rules which govern them, committing ourselves to a sport without doping and without drugs, in the true spirit of sportsmanship for the glory of sport and the honour of our teams,” their statement said.

PyeongChang is the XII Paralympic Games and also the largest so far with 570 athletes from 49 delegations taking part.

Korea has also played its part in Games history was it was 30 years ago that Seoul hosted the Summer Olympics and Paralympics, heralding the start of both events being held in the same city. The pledge was also made between the IOC and IPC for each Winter Games as well.

Competition for six Australians begins on Saturday morning with the Downhill medal races in all three classes – vision-impaired, standing and sitting.

Australia is competing in two of the six sports in PyeongChang: Para-alpine skiing and Para-snowboard.