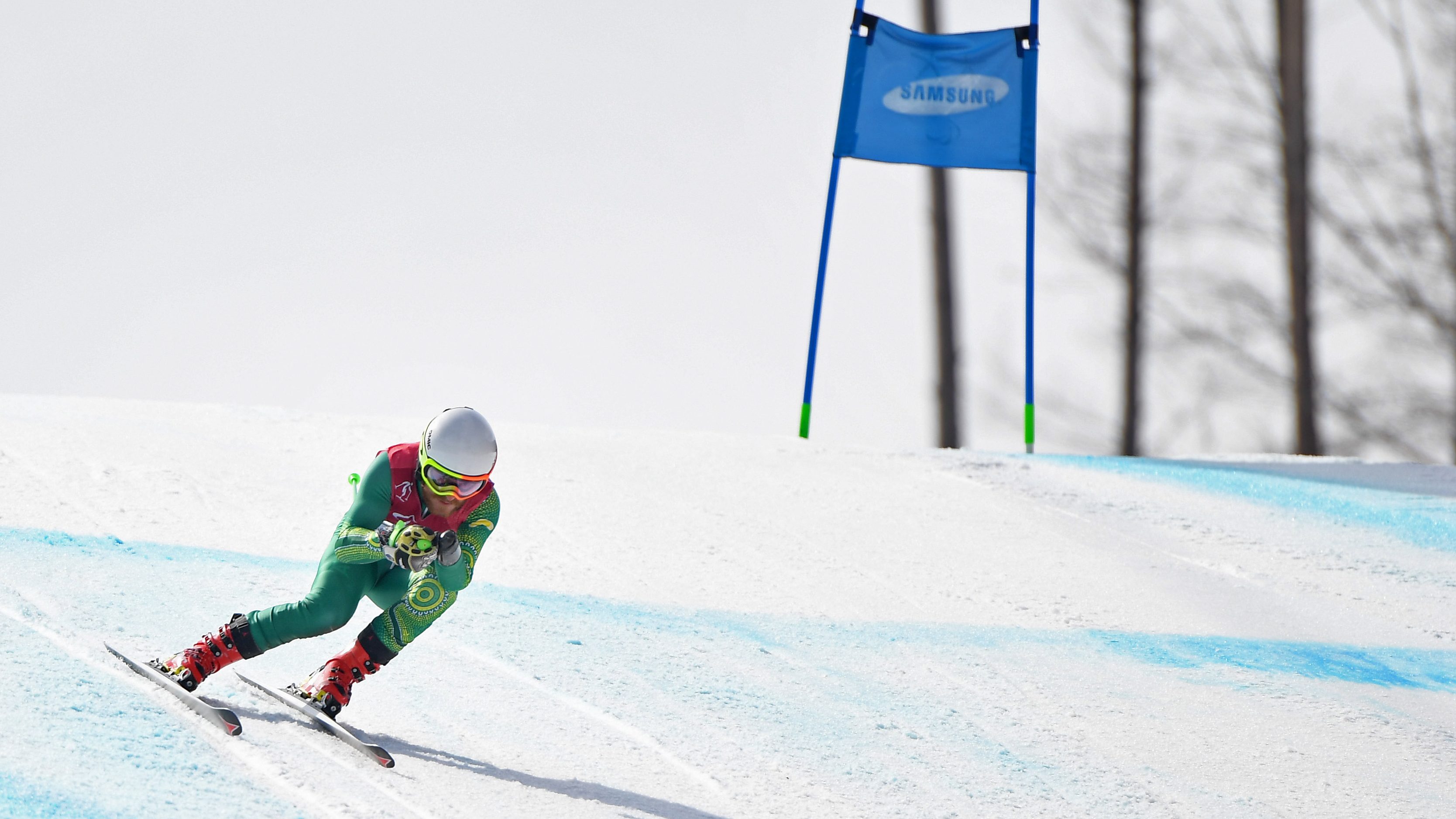 A mixed day of Downhill training results came from the six Australians, who became acquainted for the first time this season with the main ski slope at the Jeongseon Alpine Centre today as the PyeongChang Winter Paralympics are just two days away.

The Opening Ceremony will be held in the Olympic Stadium on Friday night at 8pm (10pm AEDT).

Two top-10 finishes and two crashes, registering a DNF (did not finish), was evidence of not only the tricky conditions in the milder morning sunshine than the Olympians experienced two weeks ago but also the difficulties in negotiating a course that changed from the one set at the World Cup held here in Korea 12 months ago.

“It’s super warm. The snow changed a lot from what we inspected. So I didn’t really adjust my plan for that and paid the price,” said Australian 2018 Winter Games co-captain Mitch Gourley.

“It was like this a little last year (World Cup races) but it’s definitely warmer this year.

“They have taken a bit of the terrain out of the Downhill course they did last year unfortunately, so it’s a bit less fun. Add that to the softer snow and it’s pretty grindy. But that’s how it is so we’ll handle it. ”

Gourley (Vic) finished 9th in the training run today from the 29 skiers in the men’s standing class  – the most competitive class at the PyeongChang alpine events. Fellow Victorian, Jonty O’Callaghan, came in 29th place but his time was well off the mark as he had fallen and then got himself back up to cross the line.

“Unfortunately I made a few errors and I fell. It’s something I have to rectify in the next few days,” the 20-year-old said.

Gourley was 4.5 seconds off the leader – dual Sochi gold medallist in Downhill and Super-G, Markus Salcher (Austria). But he knows there are adjustments and improvements that can be easily made.

“I’ll go up and do some free skiing now and try to feel out the snow a little more. I’ll go back to concentrating on the things that work. ”

Gourley is the most experienced of the six males on the Australian Para-alpine skiing team. This is his third Winter Paralympics to add to his five World Championships, including being crowned Super Combined gold medallist at the 2017 titles in Tarvisio, Italy.

He actually looked the “more seasoned and stately” skier today sporting a healthy beard. He’s uncertain if his facial fringe will remain when competition starts on Saturday.

“We’ll see how things go. I’ve been on the road a long time…. I got a little lazy,” Gourley said.

The other top-10 finish at Downhill training today (Wednesday) was Melissa Perrine, with guide Christian Geiger, in the women’s vision-impaired class.

Perrine is also at her third Paralympics and won three bronze and two silver at the PyeongChang World Cup races last year.

However, she was a little more tentative down the course today, and will need to catch up the seconds she gave away to reigning Sochi gold medallist Henrieta Farkasova (Slovakia).

The two male vision-impaired skiers in the Australian team of 15 – 12 athletes and three guides – are Shaun Pianta and Patrick Jensen. But neither is contesting the speed events in PyeongChang, just the technical races (Slalom, Giant Slalom).

Australia has three sit-skiers and they were all out on the Downhill course training today.

Two-time Paralympian Victoria Pendergast (NSW) did not finish due to a crash, but was unhurt and will be back at training on Thursday.

Sam Tait (NSW) finished 16th and Mark Soyer (Vic) was another DNF, or one of the seven in the 28-strong men’s sitting class field to crash. Both men became paraplegics through motor cycle accidents.

“It’s very technical (course) which I hope is going to suit me because I am quite a technical skier,” Soyer said. “But unfortunately my ski came off mid turn, which is obviously equipment failure. Which wasn’t ideal.

“But we’ve got tomorrow. The skis should not come off,” he said, but denied this blimp in proceedings would upset him as he is due to make his debut at the Paralympics here in Korea.

“It doesn’t really hurt my confidence at all. I was skiing well and it’s nothing that I did. We’ll fix up the equipment tonight and hopefully come back tomorrow and it’ll stay on.”

Tait is also on debut at a Winter Games and found conditions testing today.

“It’s pretty soft. The course is pretty bumpy. It did hold up better than I thought it would though,” the 26-year-old said, in just his second full season of Para Sport competition.

“The emotions of this year have been incredible. I can’t explain how I’m feeling, it’s awesome to be here – first Paralympics, family and friends coming over.

“I’m just going to enjoy it and take every second in.

“I don’t feel the pressure. I just take every race as it comes and whatever happens, happens. I plan on being in this sport for a long time. So at my first Paralympics I’ll just take it all in and try not to stress too much.”

O’Callaghan is the third of seven debutants out of the 12 Australians in PyeongChang. He shook his head at the scoreboard seeing how his fall on the course blew out his time.

“That’s what we have the training days for – so that if we make mistakes, we can prepare ourselves better for the actual competition,” he said.

“But it feels really good to be here. It’s been a long time in the making. I’ve been racing for almost 10 years and went through the junior system, then the talent program and then into the Paras.

“It’s been an absolutely amazing experience so far, and can’t wait to get into it. Anything you work so hard for is a definite achievement.

“So I’m proud of myself and hope I can make my country proud over the next two weeks.”

Alpine competition kicks off the XII Winter Games on Saturday (March 10) with the Downhill medals decided in all three classes for men and women – Standing (for arm/leg amputees, cerebral palsy and other conditions affecting limbs); Sitting (for wheelchair athletes); and Vision Impaired  (for totally blind or part-vision athletes).

Snowboard Cross is on Monday (March 12) and Banked Slalom on Friday March 16.