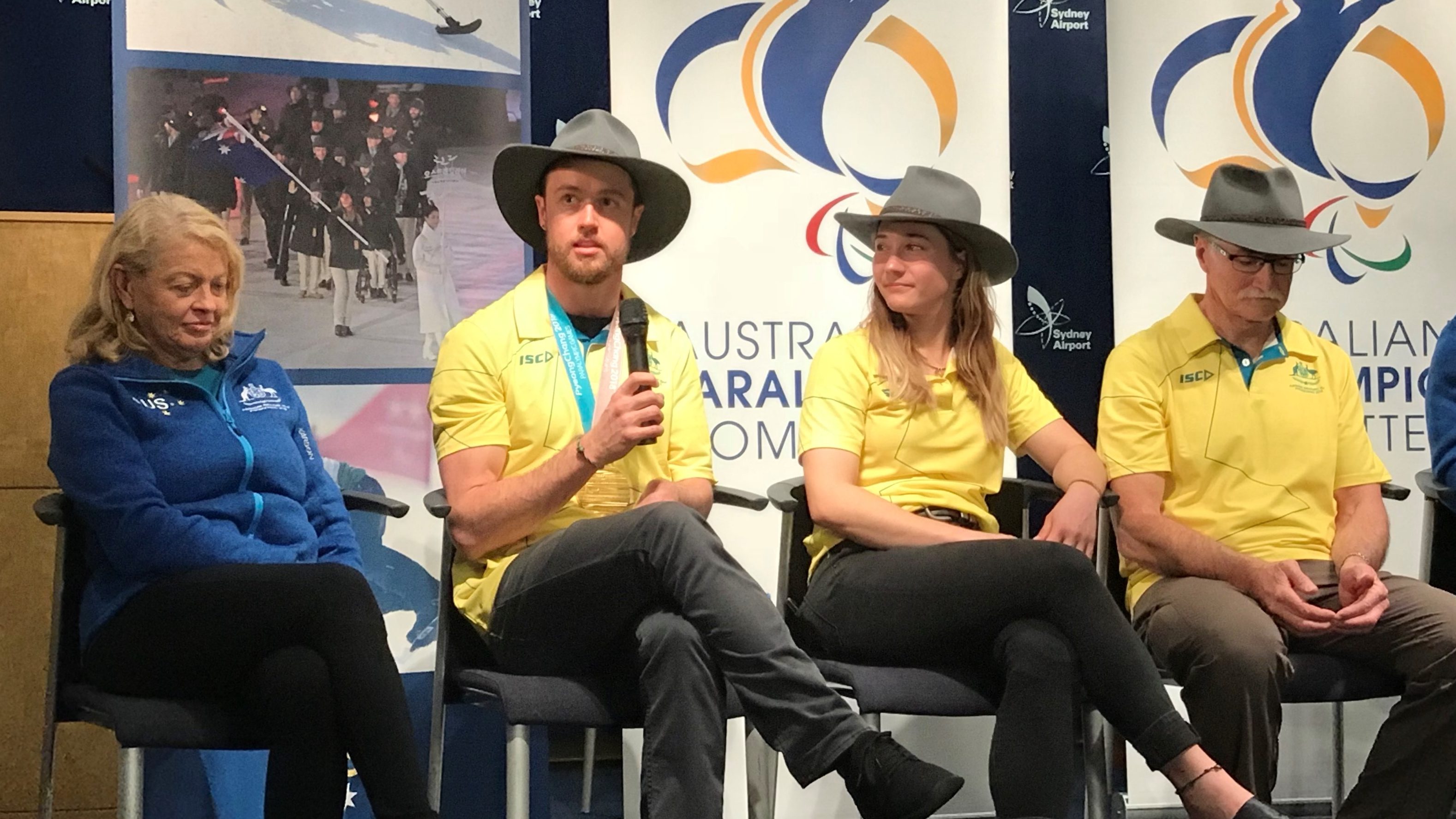 Australian Paralympic Committee (APC) CEO Lynne Anderson paid tribute to the two Winter Games team captains, Joany Badenhorst and Mitch Gourley, for the way they rallied the Team behind them in PyeongChang after a tough start.

The 15-member Team arrived back in Sydney today from South Korea, to be met with green and gold balloons, banners and signs and gift packs including jars of Vegemite from family and friends.

Badenhorst carried the Australian flag at the Opening Ceremony on March 9 and then two days later was severely injured in a snowboard training accident, dislocating her left kneecap and tearing ligaments.

But Badenhorst was in the Jeongseon Alpine Centre stands every day cheering on the three Para-snowboarders and eight Para-alpine skiers, and three sighted guides, as Gourley worked with the Team in and around the competition areas at the Athletes’ Village.

Badenhorst was seen as a definite medal chance since she was ranked in the top-three for both snowboard cross and banked slalom, and won two World Cup events in Canada four weeks out from the Winter Games.

However, the Australian team rallied without her and produced its best result – medal-wise – since the 2002 Salt Lake City Games (seven medals) with four from Korea: a gold and bronze to Para-snowboarder Simon Patmore and two bronze to Para-alpine skier Melissa Perrine and her sighted guide Christian Geiger.

“This Team showed yet again that Australia’s Paralympic athletes are extraordinary athletes and have made us so proud again,” Anderson said.

“The last 10 days have been humbling and exciting and energising at the same time.

“We started with a gut-wrenching accident to Joany but it was a credit to her that she lifted herself and put all her focus into the team because that one hurt us all. I think the team lifted because she lifted.

“As the APC we are just very blessed to have these sorts of people with us.”

Gourley, now a three-time Winter Paralympian, started the 2018 Games with a healthy-looking beard but on his last competition day – men’s Slalom – he trimmed it down to a neat moustache. He cut quite a figure in the post-race media areas wearing his steel-blue Akubra as he spoke with reporters.

“I’m super proud of the whole team and the way they performed and came together,” the 26-year-old said in Sydney today.

“Last day (of competition) I thought I’d try and make a few people smile as it might be my last ever Paralympic Games. So I wanted to go out on a high,” he said, about his moustache.

“And it matches the hat.”

Walking out into the Arrivals area at Sydney’s International Airport, Patmore was swamped by media requests with the gold medal hanging proudly around his neck.

“I tell you what it’s heavy,” the Queenslander said, as he made his way home to Brisbane today for more celebrations with family.

“I didn’t set out to be a champion but to have that title is absolutely amazing. And I’m happy to be able to do it on a team with such great athletes.”