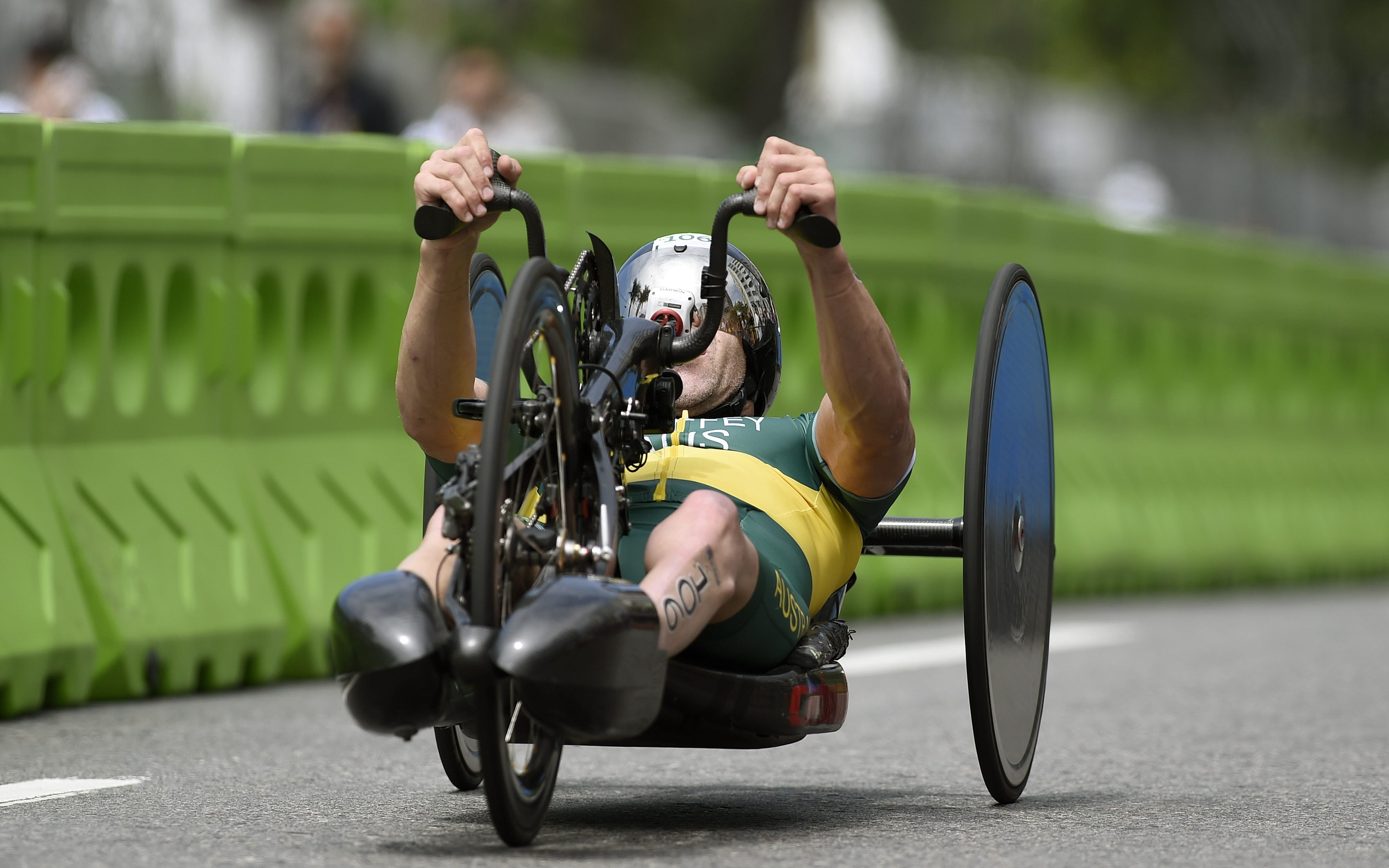 Para-triathlon daredevil Bill Chaffey has given an ironclad guarantee that he will be fit to make his Commonwealth Games debut on 7 April, despite almost crashing out at the Gold Coast Triathlon – Luke Harrop Memorial today (26 February).

It was a day that saw the triathlon switched to a duathlon, after poor water quality – following the Gold Coast’s week of rain – gave race organisers no alternative but to replace the 750m swim with a 2.5km run.

But it did not stop the tough-as-teak Chaffey from showing exactly what he is made of, in pursuit of Commonwealth Games gold – declaring he will be ready.

“I will be 100 percent at the Games, and I’ll be leading the charge,” said Chaffey, after being officially named in the six-strong Para-triathlon team that will join the already selected six able-bodied athletes, forming a team of 12 for the Games assault.

“I’ve got a couple of little scratches, but I’ve had worse shaving.”

The 42-year-old father of two and five-time world champion has promised to “slow down”, to ensure he will be on the start line when his sport makes its Games debut.

Chaffey crashed out twice, the second time in spectacular fashion, tumbling out of his racing wheelchair just 200m from the finish line, spinning off into the barriers as Age Group competitors helped him back into the saddle – costing him the national title.

“I treat every race like it’s a World Championship – I go 100 percent all the time, and sometimes that can be my downfall,” admitted Chaffey, the fearless Tweed Heads police prosecutor.

“And it was a little bit like that today, going too fast for the course conditions and the traffic that was on the course.

“It brought me undone twice, but I feel alright. I’ve got a little bit of a sore shoulder, a sore finger, a couple of scratches, but nothing that’s going to stop me.

“I will be back in the pool tomorrow morning at 05:00, and I’ll just continue the training as I’ve been going along.

“I’ve entered a race at Mooloolaba [in QLD] in two weeks – it’s my favourite race in the world. I’ve raced a lot of places, but I still love Mooloolaba the best.

“I’ll race that, but I might knock it back to 99.95 percent; I don’t want any more mishaps before the Games, and it’s double the distance. That’s why I think it will be a really good final run for me.”

Chaffey joined his teammates in front of a large crowd of family, friends and supporters, who were on hand to congratulate and welcome the team of six, with the already nominated Chaffey and reigning world champion Emily Tapp joined by Paralympian Nic Beveridge, former wheelchair basketball player Scott Crowley, Lauren Parker and Sara Tait.

“We are all here as one team, unified, and it’s a great announcement to happen here on the Gold Coast,” said Chaffey.

“The competition is red hot. These guys [Beveridge and Crowley] are right up there. It will be great entertainment for people to come out and watch, and hopefully I can bring it home.

“Even though I did have some mishaps today, I am in great form, the best form I have ever been in.”