Bill Chaffey throws caution to the wind in Games countdown 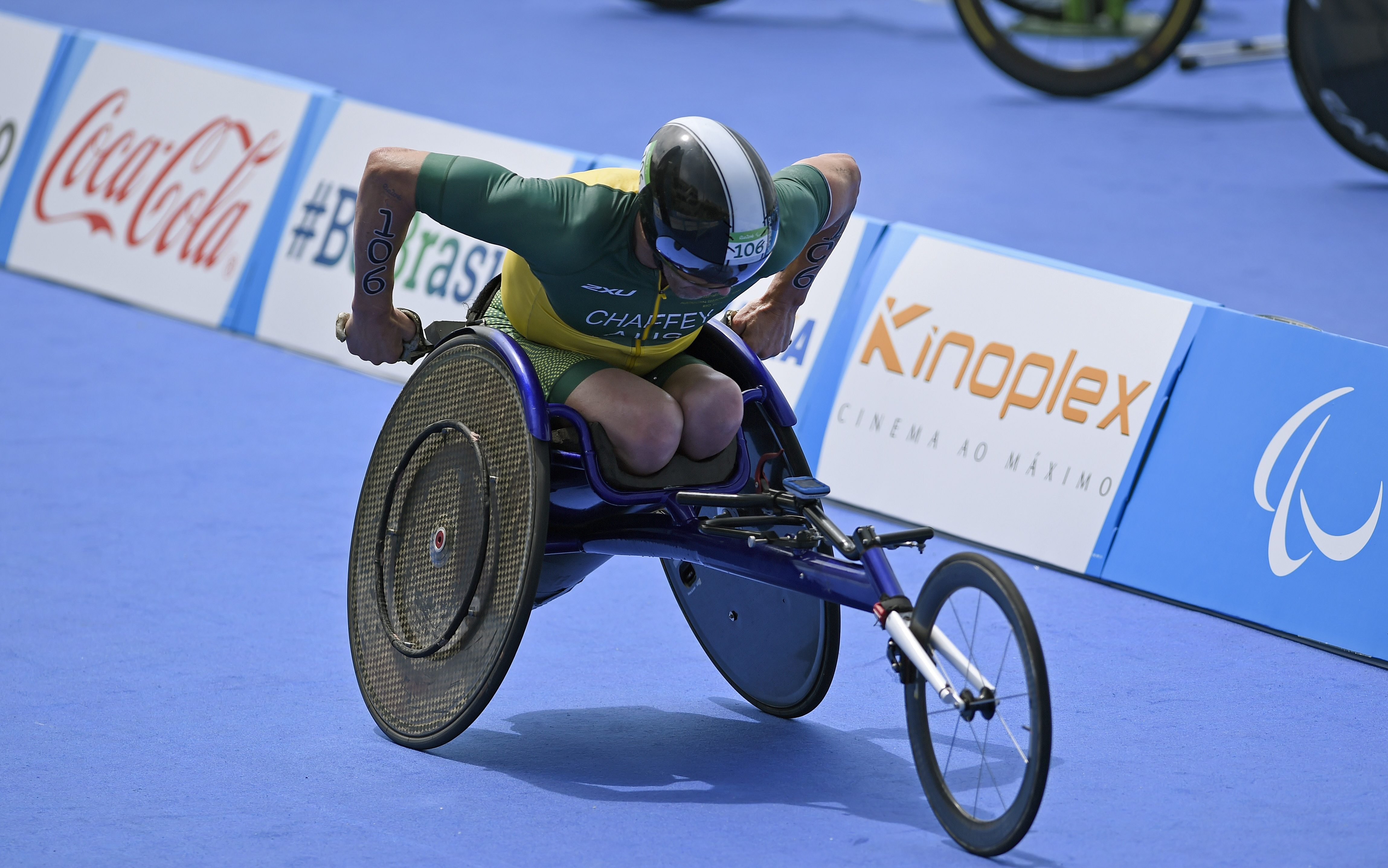 Five-time world champion Bill Chaffey will go into April’s Commonwealth Games in the best shape of his life, after using all his experience to master today’s (19 February) windswept conditions at the inaugural International Triathlon Union (ITU) Para-triathlon World Cup in Devonport, TAS.

The 42-year-old Gold Coaster made a spectacular return to elite racing for the first time since last May to defeat Paralympic teammate Nic Beveridge, Germany’s Benjamin Lenatz, and Australia’s Scott Crowley and Alex Welsh.

And it came on a day which also saw reigning women’s PTWC world champion Emily Tapp dig deeper than she has ever done before, mentally as well as physically, to take out the ITU World Cup title ahead of 29-year-old former Ironman triathlete Lauren Parker, Japan’s Wakato Tsuchida, and gritty Gold Coaster Sara Tait.

All competitors in the various Para-triathlon categories, featuring the cream of Australia’s best and top-flight internationals from Japan, Italy, Hong Kong, Canada and Germany, showed amazing skill sets to handle the – at times – brutal head winds that circled through the Mersey Bluff in and around the Devonport Surf Club precinct.

For the wheelchair athletes, today’s results come in the countdown to the official announcement next Sunday of the Australian Para-triathlon team for the 2018 Commonwealth Games. For Chaffey and Tapp, this has been a long time coming, following their automatic nominations last April.

Chaffey has been the poster boy for Australia’s glowing Paralympic program, which has seen him lead the team onto the world stage as one of the standout nations in world triathlon.

“I’m absolutely over the moon with that performance,” Chaffey said. “To come back to Devonport and chalk up a win in probably some of the toughest conditions I’ve raced in is really pleasing.

“That wind was hard to handle even though we are close to the ground on our cycles – it’s still tough going.

“But I couldn’t be happier with my fitness – I’m in the best shape of my life and really looking forward to the Games in April.”

Tapp came into today’s race feeling a little under the weather, and said her support team really played a major hand in getting her through.

“It hasn’t been the best of weeks health-wise, but it doesn’t matter come race day,” said Tapp, who qualified for the 2016 Paralympic athletics team but was forced to withdraw when she accidentally burnt herself.

“Today was a big mental feat, when your body just isn’t there and able to give like it normally [does]. We had smooth transitions and we executed our race plans, so we’re happy.”

Parker, who was an outstanding open water swimmer and Ironman triathlete before a horrific training accident last April in Newcastle, NSW, left her a paraplegic, said today was another major step in a road she never thought she would tread.

“Today didn’t go according to plan when I lost the band I put around my legs in the swim, so it felt like I was swimming with a 10km weight on the end of my legs,” said Parker, who will join the Para-triathlete group on the Gold Coast, QLD, next weekend for the Luke Harrop Memorial Race. “But we got through it, and I know I have to work on my transitions, but that will come.”

It was a successful return to top-class racing for Paralympic gold medallist Katie Kelly (PTVI) and new domestic guide Briarna Silk, with Kelly admitting the race was “a real grind” given the windy conditions.

“But it was a great way to kick-start the season that will hopefully culminate in the ITU World Championships on the Gold Coast in September and continue in Yokohama [Japan for the ITU World Para-triathlon Series] in a couple of weeks.”

Another standout performance came from Queensland’s PTS5 athlete Josh Kassulke, who was the first competitor across the line in another impressive performance he hopes will take him to the Tokyo 2020 Paralympic Games, with Aussies Dale Grant and Tony Scoleri taking second and third.

Paralympian Brant Garvey (PTS2) also turned in a brilliant showing, as did Justin Godfrey in the men’s PTS3.

Godfrey is the reigning cross triathlon world champion for his category, and a classic example of the kind of grit and determination that spurs on Australia’s band of Para-triathletes.