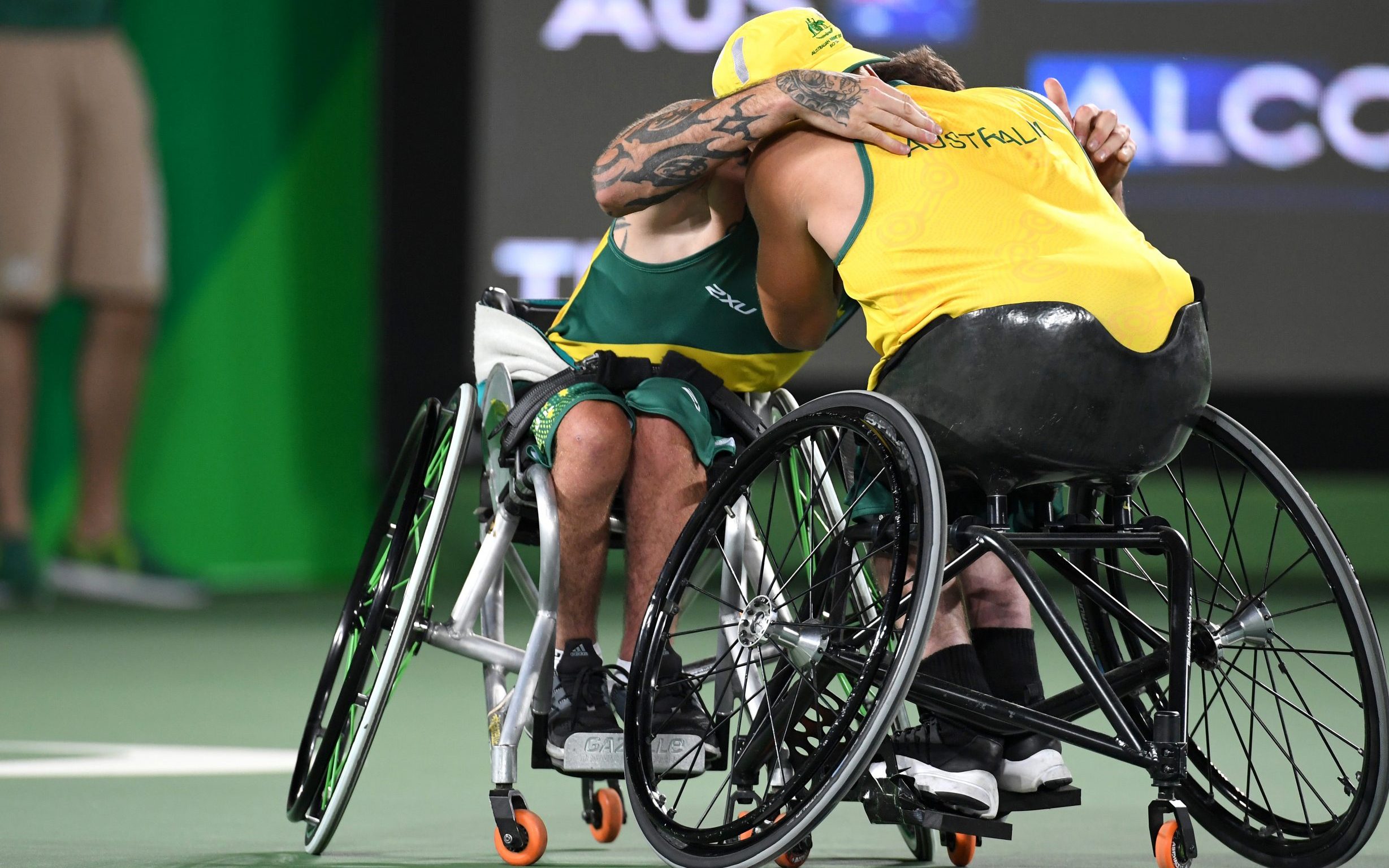 Buoyed by the support of an animated home crowd, the Aussie duo put on masterclass against the current world No. 1 and 2, taking the opening set in just 23 minutes.

With their 2017 Australian Open crown slipping away, Wagner and Lapthorne found an answer to the Australian onslaught in the second set, but Alcott and Davidson dug deeper to take the third set tiebreak, which sent the crowd into a frenzy.

“Happy days for us,” said Davidson, who – with this victory – won his first Grand Slam.

“I love getting out there and playing with this guy [Alcott]. We’ve played together in three massive tournaments and won two of them – Paralympic gold and now a Grand Slam.”

Taking in the hundreds of people on their feet and in their chairs in Melbourne Park, VIC, Alcott said that the win was not only for them, but for Australian audiences.

“10 years ago, we were playing out here with just our families. Now it’s live on Channel 7 with 1.6 million people watching.”

With no double faults and an excellent first-serve percentage of 77, Davidson had no trouble convincing the crowd that his wild card entry into this year’s tournament was well-deserved.

Currently ranked fifth in the world, Davidson said he was thrilled to beat the current world No. 2 and that he had exceeded his own expectations, after suffering a loss the previous day to Wagner in his first match of the Open.

“After my match against David yesterday, I was a bit rattled, but I knew the tennis was there and I just had to get it out of my head,” he said.

“If I can keep my head cool, I can play good tennis, and to be honest, I didn’t expect to beat him in two sets, but I thought I’d have a good shot if I played well.

Tomorrow, Davidson will take on his doubles partner Alcott in the final round-robin match before the final.

“We’re coming up head-to-head tomorrow. I guess now we have a grudge match, me and the boy. We’ve played each other 4000 times in training, but I’ve got it in me to beat Dyl. 100 per cent.”

While Alcott was crowned a Grand Slam champion for the fifth time today, Wagner earlier subjected him to a gruelling and bitterly disappointing defeat (6-4, 6-7, 6-4).

Despite having a roaring crowd chanting behind him, Alcott was unable to bring it home in the two-hour-and-33 minute match. He topped Wagner in both aces and winners, with six aces to four, and 58 winners to 53. But still, the American was just too classy.

In other results, Adam Kellerman competed in the men’s doubles tournament with Sweden’s Stefan Olsson, but lost 6-2, 6-2 and will not progress further.

The Australian Open wheelchair tennis tournament can be watched live here or via the 7Tennis app.