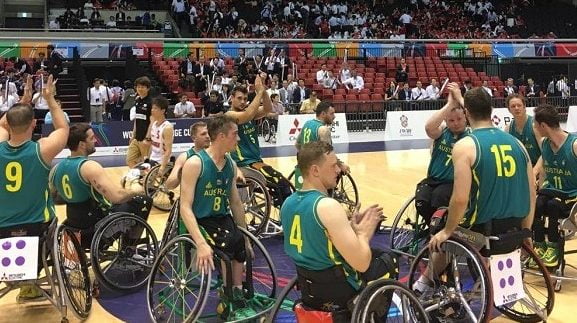 A furious fourth quarter from the Australian Rollers has seen them defeat Japan by the narrowest of margins, 70-69, in the first game of their World Challenge Cup.

Trailing by 15 at half-time, the Rollers took a while to adjust the game while Japan flew out of the blocks courtesy of a home court advantage and rabid fan support from the crowd.

Brett Stibners (11 points, eight rebounds) was a shining light for the Rollers but a couple of his teammates found themselves in foul trouble.

While head coach Craig Friday was keen to rotate through his entire roster, he was forced to adjust his line-ups to find the right combination. Out of the main break, a mid-point line-up of Jannik Blair (two rebounds, one assist, two steals), Tom O’Neill-Thorne, Kim Robins (four points, two steals), Shaun Norris and Bill Latham (10 points) saw the pressure rise on Japan with a couple of consecutive stops giving the Rollers some momentum.

They also had their most productive quarter with 20 points for the term, trimming the deficit to 10 at the last break and they continued the comeback early in the fourth period with Japan needing a timeout when the margin hit just six points.

Two more stops out of that timeout got the game back to a single possession which set up a thrilling finish as both teams battled for ascendancy.

Norris (16 points, nine assists) was clutch for Australia with an elbow jumper, before O’Neill-Thorne (21 points, four assists) connected on a huge and-one lay-up to give the Rollers a one-point victory.

“It was a great comeback through some adversity and challenges,” said Friday.

“In the opening game of the tournament, it was a small step forward.”

The Rollers are back on court today with a double-header against Great Britain and Turkey before they play their final game over the weekend.