Cooke plates up double serving of rainbows in South Africa 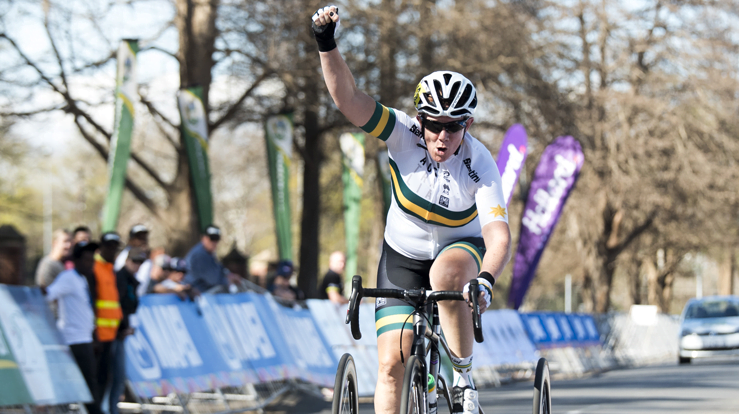 Carol Cooke (VIC) secured her second world title in three days after claiming victory in the road race on Saturday at the 2017 UCI Para-cycling World Championships in Pietermaritzburg, South Africa.

The 2013 and 2014 champion in the event, Cooke was determined to regain the title after winning silver in 2015.

“The women have gotten a lot stronger in the past two years, and today’s racing was really hard,” said Cooke.

“But I really wanted to wear the rainbow jersey again and I am very happy with my win today!”

This win comes off the back of a standout twelve months for Cooke who claimed two gold medals at the Rio 2016 Paralympics Games, three gold, two silver and one bronze during the 2017 World Cup season, and both national championship crowns earlier this year.

Darren Hicks (C2, SA) raced the clock to come away with a hard-earned silver medal and Meg Lemon (C4, SA) rode hard against the wind to secure bronze on debut.

“It’s very cliche but it’s been a dream since I first started that one day I would be good enough to ride for Australia, so just making the team was pretty surreal,” said Hicks.

“Never in my wildest dreams did I see myself, in my first world champs, making the podium, it’s just unreal!”

Lemon’s podium comes off the back of a breakthrough 2017 World Cup campaign, from which she rode away with three golds.

“Considering I couldn’t even ride a bike two years ago, to be standing up on that podium was the icing on the cake and I would not have got anywhere near this without the support I have been given from everyone along my journey,” said Lemon.

Photo with thanks to Andrew McFadden/Cycling Australia