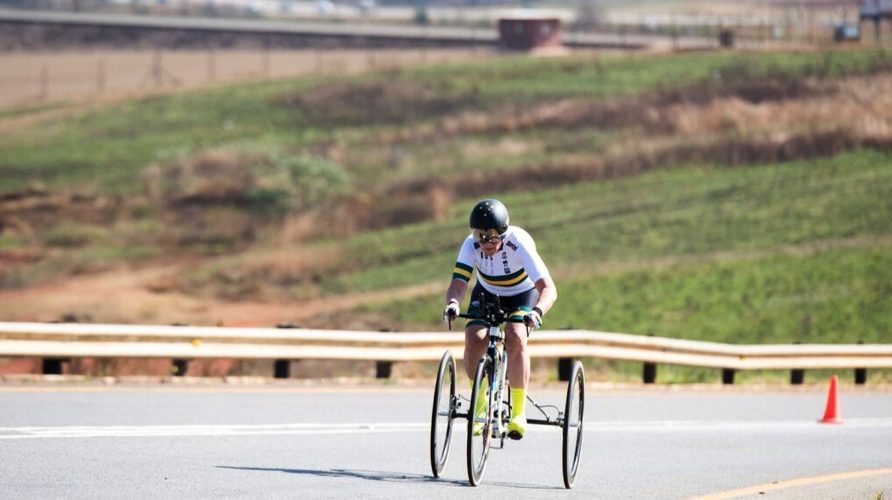 “I am over the moon!,” said Cooke after claiming her sixth career world championship title.

“But I’m still shaking my head because after the Rio Paralympic Games it was a huge question of whether to keep racing or not.

“But I love riding and I love racing so I guess I’ll keep doing it until someone tells me I shouldn’t be!”

In windy conditions, Cooke covered the two laps of the 7.5km course in a time of 33mins 03.980secs to take the win in the women’s T2 tricycle category by seven seconds over close rival Jill Walsh (USA).

“The course is a really tough time trial course, but because I have ridden it before, I was expecting it,” said Cooke, who revealed it was a nerve-racking ride after being told by head coach Peter Day there was nothing between the pair at the start of the second or third laps.

“We were even at the halfway mark, and at the last turn to then head the final three kilometres to the finish we were still dead even, so I knew I just had to put my head down and give it everything I had.

“I think today even if Jill had got the win I would have been happy with my ride because I couldn’t do anything else, I left it all out on the course.”

The win was a welcome result for Cooke who finished the 2017 World Cup Series in second overall behind Walsh after winning three gold, two silver and one bronze during the season.

“The other girls are slowly catching me, in fact I got beat in the time trial this year by Jill in one of the World Cups, so I know that she is capable of doing it,” said Cooke, who will have 24 hours to prepare for the road race, an event she won in both 2013 and 2014, before being edged into silver at the last championships in 2015.

“Very keen to get those stripes back!,” Cooke remarked.

“There are two Americans in the mix however so it will be interesting to see the tactics that they use.

“But I like the course and my last race against the girls I blew a tyre in the last 600m and still was able to sprint to the finish, so I am hoping that they remember that and it puts them off a bit!”

In other results from day one, Emilie Miller (NSW) recorded 1hr 47mins 32.51secs in her H1 ride, but in a field of one, she will not receive a medal.

Paralympic silver medallist and H5 competitor Stuart Tripp (VIC) finished just off the podium in fourth place, covering the 23km distance in 39mins 53.56secs, and Grant Nickel (NSW) finished sixth in the H1 final after posting a time of 54mins 03.39secs for the 15.5 km course.

Photo with thanks to Andrew McFadden/Cycling Australia