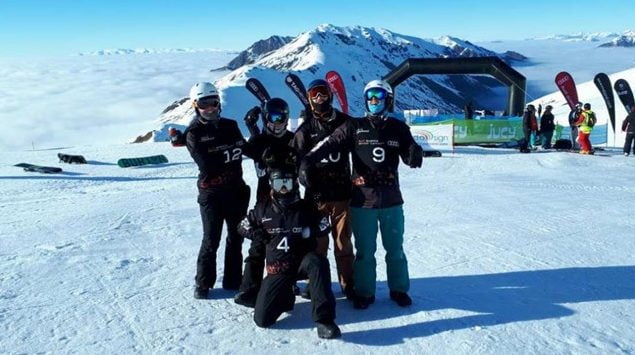 Chilly conditions the night before froze the banked slalom course, with coach Lu Prem describing the course as “by far the most technical banked slalom we have seen on the Para-snowboard World Cup tour”.

Not enough to intimidate the Aussies, Southern Hemisphere Cup winner Joany Badenhorst took gold in 1:10.52, followed by Great Britain’s Cassie Cava in 1:18.52 and Brittani Coury from the USA in 1:20.68 in the Women’s SB-LL2.

“The course is pretty amazing. It is really challenging and quite difficult, making the riders put their best ride forward. I have been snowboarding for going on four years, with back-to back-seasons since Sochi 2014, and I have seen a lot of courses. There has been so much work put into this course by the designers and they have nailed it,” said Badenhorst.

Among the first of the men down the mountain was Para-athlete-turned-snowboarder Simon Patmore, who took silver in a time of 1:08.66. Michael Minor (USA) won gold in 1:08.04, while China’s Zhuo Chen came away with bronze in 1:09.15.

“Simon was in striking distance of Mike Minor in the second run and almost pulled off a clean run three, but missed out on top spot by just over 0.6 of a second. Still things to work on but the direction is right and with a clean run anything is possible,” said Prem.

The Men’s SB-LL2 was hotly contested, with the lead changing several times between Michael Shea (USA) and Aussie Ben Tudhope.

Shea came out on top with a final run of 59.00, with Tudhope taking silver and his first podium in 59.28. Pushing the two leaders all the way was Wanaka local Carl Murphy (NZL) in third in 1:01.21.

“Ben was the guy to beat today,” said Prem.

“He held the lead in the first two runs, had a great run in the third run but risked a bit too much and got pipped by Shea, but was almost two seconds ahead Murphy. All the technical training is starting to show.”

Also impressive for Australia were Sean Pollard on debut, coming in sixth in the Men’s SB-UL, and Alex Handley in eighth.

Photo with thanks to Ski & Snowboard Australia