Reardon and Turner crowned kings of the track 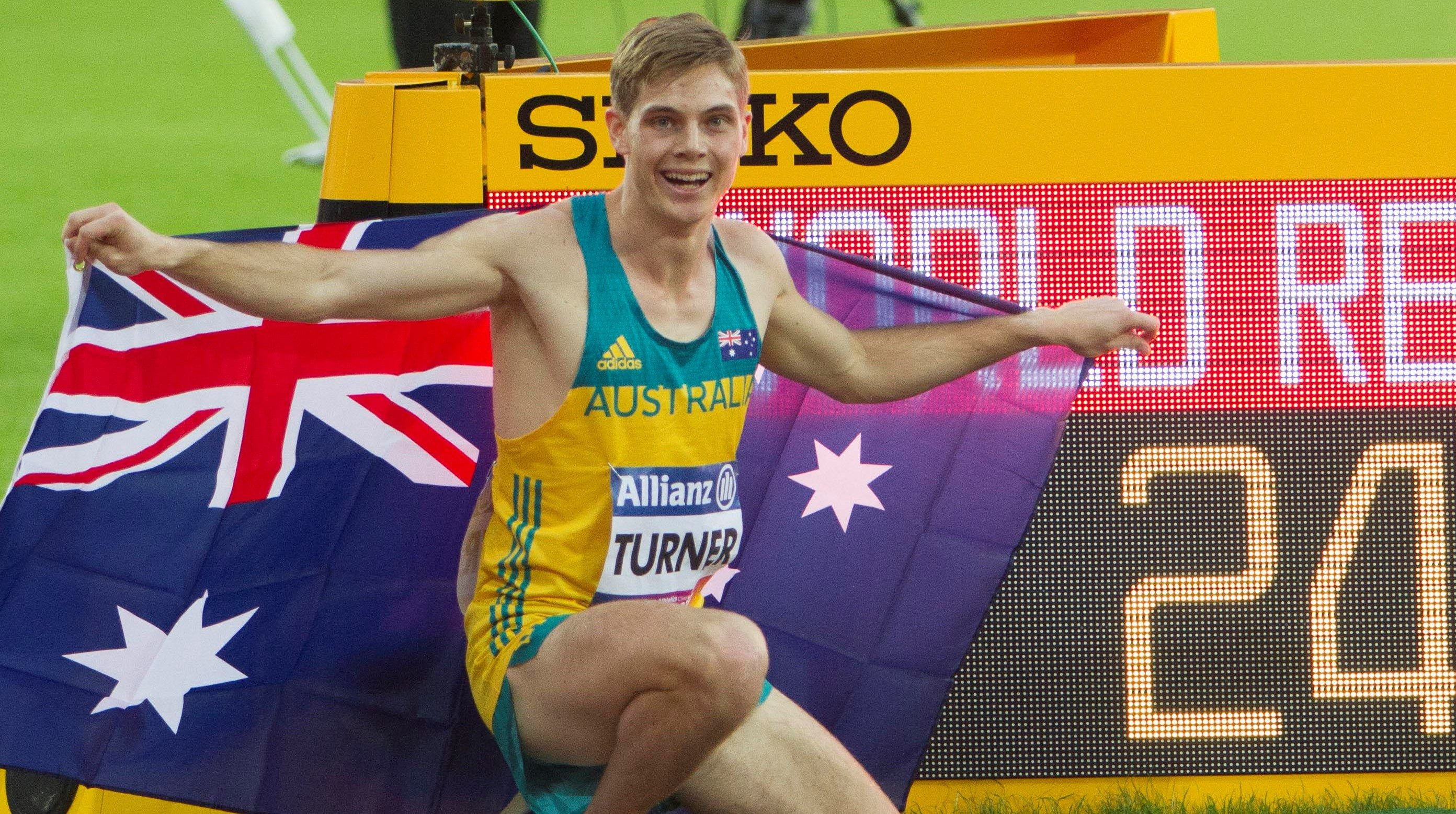 A hat-trick of 100m world titles for Reardon, Turner claims his first in world record time

Victory was the theme of the day, as two more Australians were crowned world champions, and another two earned themselves silver and bronze on day four of the World Para-athletics Championships in London, England.

Scott Reardon (T42, NSW) proved he is the undisputed king of the track in the T42 100m, after claiming his third consecutive world title in the event – an achievement no T42 athlete before him has managed.

Flying across the finish line in a time of 12.21 (-0.4), ahead of Denmark’s Daniel Wagner (12.30) and home crowd favourite Richard Whitehead (12.39), Reardon believes his success in his quest for gold came down to a well-executed race plan.

“I came here with a plan to execute the first 20m of the race and put a bit of pressure on the rest of the guys,” said the Temora native.

“I think there’s a thought that I can’t run very fast because of my little legs, but when I execute a race well and I’m out in front, I’m tough to catch. I did that well, and that’s what matters most at a championships like this.”

Up against some of the toughest competition in Para-athletics, Reardon gave complete credit to his coach Iryna Dvoskina, whose dedication to his progress ensured his success once again.

“When I came into Para-athletics, I was a young, naïve water-skier who thought I could be the best, and fortunately I was able to meet up with Iryna, and she turned me from a water skier into the athlete I am today,” he explained.

“A coach can coach an athlete to success once, but to do it over and over again is a sign of an absolutely magnificent coach and she’s able to do just that.

“I shouldn’t be competitive with these guys – I’m only short and I don’t have the physical attributes of some of the other guys, so to be able to take advantage of my strong suits and put that into practice, that makes me the best, I guess, and that’s because of her.”

After breaking the world record in his heat for the T36 200m on night three of the Championships, James Turner (T36, NSW) soared to glory again in yet another world record time of 24.09s (-0.4).

The 21-year-old from Diamond Beach finished close to an entire second ahead of silver medallist Kryzsztof Ciuksza from Poland to win his maiden world title.

“It’s absolutely amazing to win my first world title, but to be honest I didn’t think it’d be in the 200m,” he said.

“All I was thinking about was my race plan: fast at the start, ease at the bend, and slingshot out of the bend.

“I was hoping I’d break another world record (before running tonight) but I was a bit concerned I ran too fast in the heat, but to break it again is just fantastic.”

The best part for Turner, is that his pet event is yet to come.

“I was expecting the 200m to be my hardest event, and I’d have to fight tooth and nail to get a placing, so I’m really happy with the way I went, and I know I’ve still got more left in me.”

But that was not all for Australia’s success on day four of competition. Erin Cleaver (T38, NSW) achieved her best international result yet in the T38 long jump, landing 4.61m (+0.1) to win silver – her first major medal in the event.

Cleaver had been in the gold medal position until her third jump, when Great Britain’s Olivia Breen surged forward to 4.81 (+0.5). Despite having lost the gold, Cleaver was thrilled with her overall result.

“I was not expecting that one bit. Coming in, I was hoping to get a PB but even though I didn’t quite get that (4.62m), coming out with a silver medal is an amazing feeling and one that’s pretty motivating,” Cleaver said.

“It was great to be in the lead for so long until Olivia took her third jump, but I’m still overjoyed. I’m still shocked that I’m in the medals let alone out there.”

Madison de Rozario (T53, WA) won her second consecutive bronze medal in the T54 1500m (3.25:56s), and is prouder than ever of her result, having competed against a full field of competitors.

“That was incredible. I won a bronze in this event in Doha, but two of the quickest women weren’t there at the time, so to do that again in a full field was great, and a lot of fun,” de Rozario said.

“It was a messy race, there were a lot of different tactics going and we were all floating around in the middle for a while there, but I’m glad I could catch a good wheel and make a strong finish. I think it’s given me some confidence going into my 5000m in four days’ time.”

Cut from the same Dvoskina cloth as Reardon is Chad Perris (T13, WA) who cruised through his 200m T13 heat in third position (22.43s) to qualify for tomorrow’s final.

Perris, who won the silver medal in the event in Doha in 2015, said:

“I knew I had to be first three to get through, and I was pretty conservative in the last 60m so I know I’ve got a lot to give tomorrow. I think I can pull out a better race to what I did last night [T13 100m], and I’m ready to go out there and put my best foot in.”