Gold to Kelly and Tapp as Aussies taste success in Edmonton 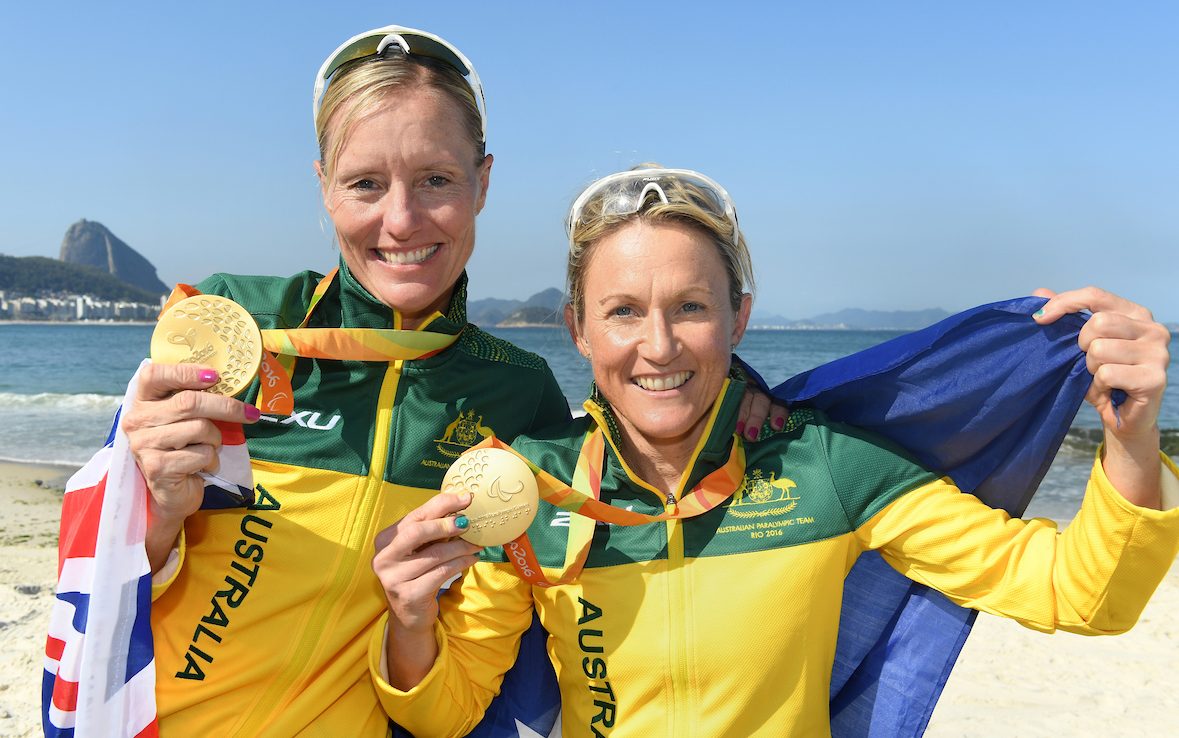 The six-strong Australian contingent finished the day with two gold, one silver and one bronze medal, with Sally Pilbeam (PTS4) taking her second ITU World Series silver of 2017, and Paralympian Kate Doughty (PTS5) coming away with bronze.

It was a perfect hit-out for the Australians, despite Paralympic legend Gerrard Gosens (PTVI) dropping a bike chain on the first hill climb.

After running up the hill on foot, Gosens and sighted guide Dmitri Simons recovered well to finish a creditable sixth, while Josh Kassulke (PTS5) finished seventh in his all-star class.

“We dropped the chain on the first hill, so we had to run up it and then catch up a lot of time on both the bike and the run,” said Gosens.

“While it was a good effort, it was an equipment failure that cost us third place. It was just one of those things when you drop a chain.

“That can happen. You just have to get back on, and like true Aussies with the Australian spirit, get back up and [in the saddle].

“The course was great. The hill was the toughest part of the whole thing, four times around which takes some of the sting out of the legs.

“It was good that we were able to get going and pass those teams that went past us on that first lap.”

With ITU Hall of Fame inductee Michellie Jones as her guide, Kelly, who has been managing a calf injury since December last year, admitted: “It was just good fun to be out there racing again today. We really enjoyed it.

“Michellie has come over from the USA, and we’ve had the week together in preparation. I guess what we really wanted was to put together a good race, and it was great to get that result.

“We have built a special partnership and I’m very grateful for it. We first came together in Yokohama [Japan for the ITU World Para-triathlon Event] in May 2015 and went on to win the World Championship that year, and then on to Rio [Brazil for the 2016 Paralympic Games] last year for that amazing gold medal.

“No one knows what it’s like to be in a partnership like ours. I love it, the good and the bad moments.

“It’s been a long road since Rio. I’ve had some injuries and made a few changes – linking up with a new coach, Dan Atkins, at the Triathlon Australia High Performance Centre – but after coming through this race today, we are really focussed on the World Championships in Rotterdam [Netherlands] in September.”

Doughty, who placed fifth in Rio to then win gold at the World Series event in Yokohama in May, was suitably pleased with her bronze behind Paralympic gold and silver medallists, Grace Norman (USA) and Lauren Steadman (GBR).

“I had a lot of strategies to put in place mentally and just really focussed, sticking to my plan,” said Doughty.

“I did that and felt like I executed it really well, and it’s a great step towards World Championships in September.

“That’s the first course I’ve had with a hill in it, and you know what, I surprised myself.

“My fitness has definitely improved a lot and I was able to get up and over it quite easily, and I probably had a very solid run considering, after a tough bike course.”

Doughty said that overall, she was feeling great about what has been a really good season for her.

“It is what it is on the day, and if I can execute the plan perfectly, then the results will show,” she said.