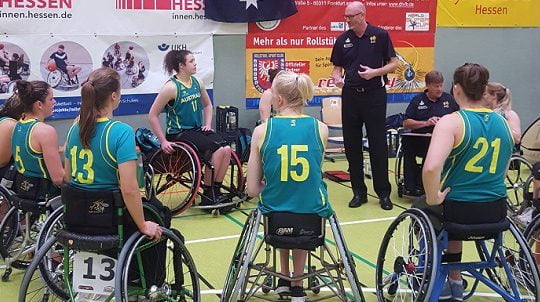 The Australian Gliders have completed the group stage of the 2017 Continental Clash with a 2-1 record and will now head into a semi-final showdown against Germany for a chance to play off for gold.

Arriving in England directly from a tournament in Germany where they placed third, the Gliders faced two games on the opening day of the Continental Clash against Germany and Great Britain.

Jumping out to an 11-point lead at quarter-time, Australia took control of their first clash against Germany.

However, fighting back to trail by just one at the final change, Germany took a 3-point lead 23-seconds out from full-time.

Reeling off the first seven points, the Aussies clinched a 73-67 victory in an impressive display of intensity down the stretch before calm composure got the job done in overtime.

Starting off strong against Clash hosts Great Britain, who achieved a fourth-place finish at the Paralympic Games last year, Australia led by two at quarter-time before succumbing to a 10-19 final term to go down 49-62.

Crispin, who was well-supported by Sarah Vinci, Ella Sabljak, Annabelle Lindsay and Bree Mellberg, again led all scorers with 23 points, finishing the day on 24-35 shooting (69%).

Australia took on Japan in the final game of the group stage, but were in unfamiliar territory at the first change, trailing 14-21.

Crispin (24 points, 13 boards, 10 assists) and Merritt (21 points, seven rebounds, three steals) turned their fortunes around in the second period, combining for 16 points, and with support from Georgia Munro-Cook (eight points) and Del Toso (six points), the Gliders charged ahead by seven inside the final three minutes.

Japan had one last run left in them. Led by WNWBL player Mari Amimoto (16 points, nine rebounds, nine assists), they scored seven consecutive points to tie the match with 40 seconds to go.

Merritt answered with a basket, before the Aussies recorded a stop and Vinci secured them a 67-65 win from the free-throw line.

Great Britain, Germany and Australia all finished the group stage with a 2-1 record, with Australia placing third overall to set up the semi-final showdown against Germany tonight.

Great Britain will take on Japan in the other semi-final, with the two victors playing off for gold on Friday night.

British Wheelchair Basketball may stream the games live via their Facebook page.