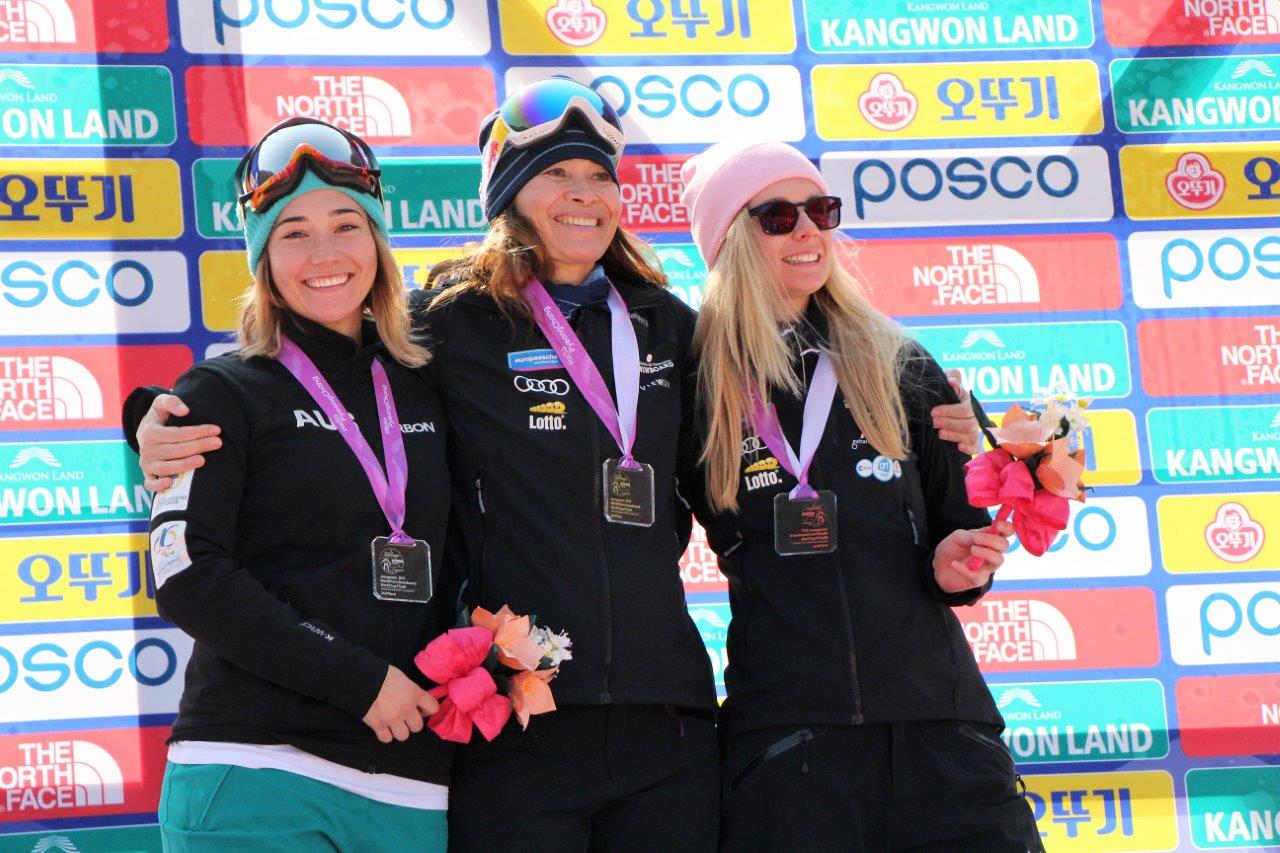 A career-best season for Joany Badenhorst came to a stunning conclusion today at the IPC World Cup Finals when she claimed the silver medal in the women’s LL2 banked slalom in PyeongChang.

It capped a memorable day for Badenhorst, who was also presented with her IPC World Cup Crystal Globe as the season’s leading point-scorer in snowboard cross.

“I’m over the moon, I’m so happy,” Badenhorst said.

“It’s massive boost for my confidence. I definitely didn’t really expect this.”

After arriving in PyeongChang for the IPC World Cup Finals in blazing form, Badenhorst picked up the silver medal in the snowboard cross on Friday and entered today’s banked slalom brimming with confidence.

With only the fastest time from three runs counting for each competitor, Badenhorst sealed the silver medal with her second run, delivering her fastest time of 46.46 seconds.

And while it was not enough to depose the reigning Queen of the LL2 classification, Netherlands rider Bibian Mentel-Spee, whose second run (46.30) and third run (45.36) were both good enough for gold, Badenhorst made sure that the Dutch legend felt the pressure all the way down to the finish line.

“I think I’m giving her a really good run for her money,” Badenhorst said.  “I think now the heat is really on.

“The pressure is there and I think she feels it. I hope so. This is why we’re here, this is why we do it.”

“The racing was intense. It was so close,” Badenhorst said.

“I was so close to first, but again it just shows my progress and I could not be happier with the way I handled today.”

In the men’s event, the four Australians in action also performed strongly.

2014 Paralympian Ben Tudhope (43.36) finished seventh in a red-hot contest in the LL2 classification, in which the top 10 athletes posted times within 2.81 seconds of Japanese rider Gurimu Narita’s victorious run (41.62).

For Pollard and Handley, it brought their debut season on the IPC World Cup circuit to a close.

With all five of his charges now heading home, Australian Para-snowboard Lukas Prem believes there is plenty to be excited about as the squad continues its push to win Australia’s first ever Paralympic medal in snowboarding next March.

“The overall performance this season has been really good,” Prem said.

“We have kept our streak of having an athlete on the podium at every competition for two seasons now and we plan to keep it that way.

“All the guys are improving all the time and I’m really happy with the new guys. I’ve been blown away by the progress. There is overall improvement in everything we have worked on.

“Now the plan moving forward is to get back to basics. Solidify the base riding skills and then we can really chip away at targeting really specific training and making sure we’re ready to go when it matters next year.”