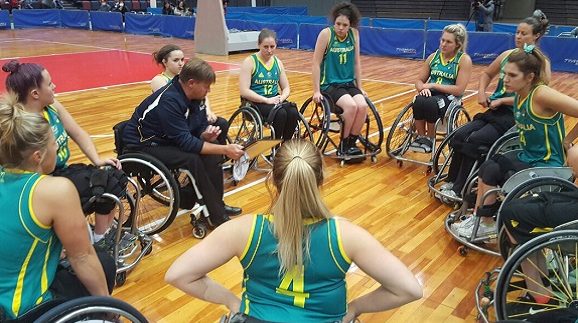 The Australian Gliders have started the road to the  Tokyo 2020 Paralympics with a silver medal at the Osaka Cup, their first international tournament under new coach David Gould.

Facing host nation Japan as well as Great Britain and the Netherlands who both finished in the top four at the Rio Games, Australia will be pleased with the team’s performance which featured three new faces in Isabel Martin, Bree Mellberg and Annabelle Lindsay.

In the group stage, the Gliders defeated Great Britain, 57-48, in their opening game as they bounced back from an eight-point deficit at quarter-time.

The following day, the Gliders faced two games but they were unable to create a winning streak as they fell to the Netherlands, 39-67 in the afternoon.

Australia again found themselves trailing at the first break but were unable to pull themselves out of the hole this time as the Netherlands went on to win every quarter.

Crispin (12 points) was the only player to reach double-figures for the Gliders but Lindsay (four points) hit her first international points in a boost for the youngster.

Heading into their final pool stage game, Australia needed a win over Japan to advance to the gold medal match and they started well, leading by three points at quarter-time.

They then put the foot down in the second term, opening up an 11-point edge and the Gliders consolidated that lead up until the final siren, winning 70-57.

Merritt was damaging at both ends, collecting 23 points on 11-16 shooting to go with 11 rebounds and four steals while Crispin recorded another double-double of 17 points and 10 assists and Leanne Del Toso also impressed with 12 points on perfect 6-6 shooting.

That set up a re-match against the Netherlands for the gold medal on Saturday and Australia showed signs they had developed their game since the pool stage meeting as the game was tied at quarter-time.

The Netherlands slowly opened up a lead from there though and while Australia threatened a comeback a few times in the second half, they could never string together enough baskets to truly bother their opposition, going down 40-55.

Merritt and Crispin were again the stand-outs, recording double-doubles each to combine for 25 points and 21 boards while Sarah Vinci also had an impact as she played all 40 minutes.

In addition to the Gliders’ silver medal, Merritt was named in the All-Star five as she led her country in scoring for the tournament.