Reardon to take on Wallace at Nitro Athletics 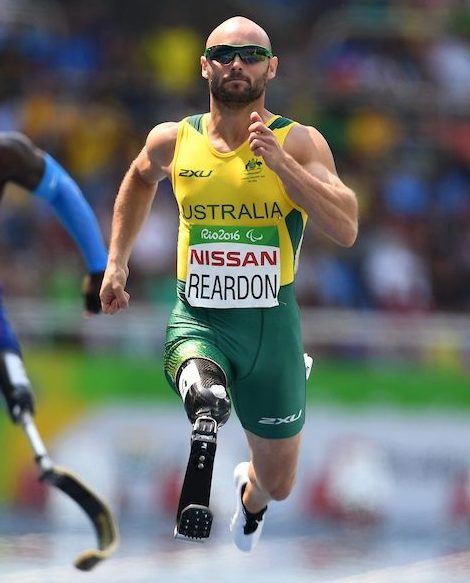 Two of the very best para-athletics sprinters in the world, Australia’s Scott Reardon and Jarryd Wallace from the United Sates, will be facing off in seeded-staggered start races at Nitro Athletics next month at Lakeside Stadium in Melbourne.

Also competing in the series will be Australian Paralympian Ella Pardy, who is the Australian and Oceanic record holder in both the T38 100 and 200 metres.

She will come up against French superstar Marie-Amelie Le Fur who won Paralympic T44 100m gold in London and is now the F44 long jump champion from Rio, giving her a grand total of seven Paralympic medals in her cabinet.

Reardon will represent Team Australia as the reigning Paralympic T42 100m champion while, Wallace the former world record holder in the T44 100m and 200m from the United States will be chasing him down for the Bolt All-stars.

Both men are up for the contest and Wallace is thrilled to start his season in Melbourne running on the same team as nine-time Olympic champion Usain Bolt.

“I’m super excited to be a part of Nitro!” Wallace said.

“The idea and concept of creating a more appealing version of track and field is what this generation needs to fall back in love with the greatest sport of all time.

“I’ve never been a part of a staggered start event before, but very excited to experience the chase and catch feeling it will no doubt create.

“The competition will be unique with combined classes and the will create a spin on the sport without a doubt.“

Wallace is yet to achieve the ultimate at the Paralympics with a sixth in London in the 400m and fifth in the 100m at Rio, but is committed to getting redemption at Tokyo in 2020.

“Rio was a disappointment to say the least,” he said.

“Coming off the most consistent and best year in my career I fell short of what I was hoping.

“The long-term focus is Tokyo, I live four years at a time.  I will finish my degree and begin a doctorate in Industrial and Organizational Psychology while I train and do races and hopefully I can compete for many years to come.”

The 26-year-old will go head-to-head with Australian star Reardon in February, an athlete who he has admired from afar both on and off the track.

“Scott is an amazing ambassador and competitor in Paralympic sport,” Wallace explained.

“I’ve always enjoyed watching him compete and will be honoured to share the track with him.

“He seems like such a laid-back dude with a fire for greatness. He is a great example of excellence in the sport of track and field.”

Reardon is the reigning Paralympic champion in the T42 100m from the Rio Olympics, going one place better than his silver-medal in London four years prior.

He too is looking forward to the rare opportunity of competing against and alongside some of the best track and field athletes in the world, including the fastest of them all in Bolt.

“To have an action-packed evening of athletics to show the skill, power and athleticism of the athletes, I think that the crowds will love the fast-paced action that Nitro will provide.

“I am excited to race, I am yet to compete since Rio so every time I get the chance to race is exciting, but there is definitely added excitement around Nitro, as there is so much unknown outcome with what the race.

“With us, anyone can win, which is exciting.”

The 26-year-old has limited recent experience running gift races but is keen to put on a good show for those watching at the track and on the Channel 7 broadcast.

“A long time ago, my last gift race was in 2009, so it has been a while, it’s going to be fun, I’ll be out in front and the other boys will be on me so fast at the end, will be awesome for the spectators to see,” Reardon explained.

“I guess I have three main goals over the next four years, win world championships in July is the first, running sub 12 for the 100m is high on this list too, something that I have wanted to achieve since day one.

“Longer term I want to defend my Paralympic title in 2020.”

The two-time T42 100m world champion will start with a lead on Wallace based on their classifications and personal bests knowing the American is just as committed to winning any race he enters as he is himself.

“I have been able to watch him develop over the years and he has been a big part of the rapid progression of the T44 class,” Reardon said.

“Side by side he has me covered, but handicapped races always provide really tight races, so it will be a good match-up, I guess we are in similar phases of preparation so we will both have to bring our A-game if we want to win.”