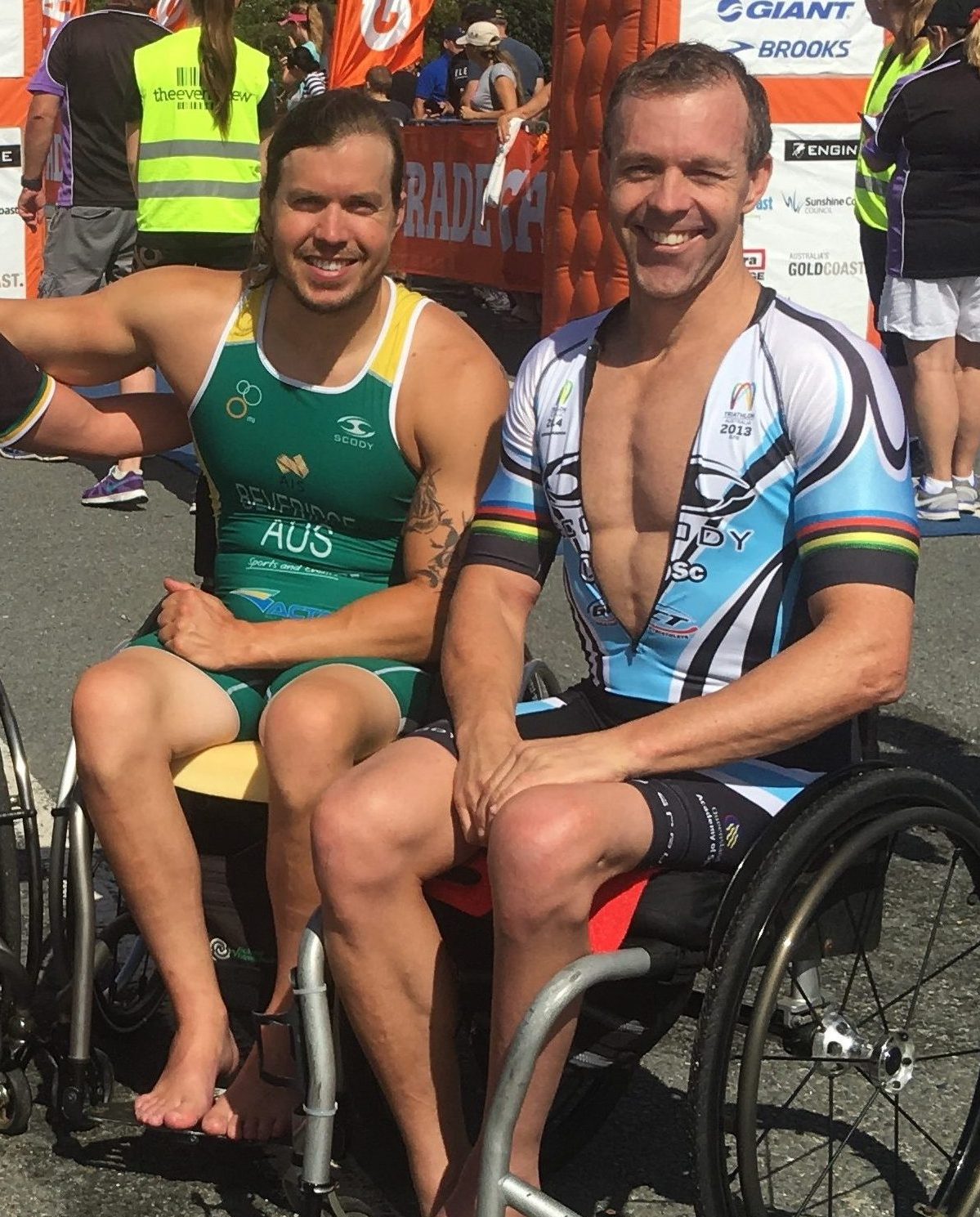 Australia’s finest Para-triathletes and emerging triathlon stars rubbed shoulders at Robina over the weekend knowing that all roads will lead to the Gold Coast  over the next two years.

Rio Para-triathlon gold medallist Katie Kelly and guide, triathlon legend Michelle Jones, along with their Paralympic team mates Bill Chaffey and Nic Beveridge were all back in their saddles today.

Kelly and Jones combined for the first time since their magical moment when they raced to the Rio gold on September 12 last year.

They were solid in the swim and then went up a level on the tandem bike, showing the crowd the kind of skill and power that saw them etch their names into Paralympic history.

But that was the end of the road for Kelly who decided not to risk a niggling calf injury in her comeback race with the up-coming Oceania and World Paratriathlon race on the Gold Coast in April high on her 2017 goals.

She left it to ITU and Ironman world champion, 2000 Olympic silver medallist to continue the 2.5km run by herself.

“It was not worth the risk, I have this niggling calf injury and I thought it was better to withdraw – we have some bigger fish to fry later in the year and I want to make sure I am 100 percent,” said Kelly.

“But to put our recent training block into race practice while Michellie is in Australia, especially on the bike, was certainly worthwhile.

“Michelle will be back from the US again in April and we want to give the WPE a red hot go.”

As for PT1 stars Chaffey and Beveridge who were fourth and 11th respectively in Rio and fellow P1 male Scott Crowley and PT1 female Emily Tapp today’s race is the start of what will be an exciting countdown towards Commonwealth Games selection.

Like Kelly and Jones, the PT1 team will have the WPE event on the Gold Coast on April 8 but it is their classification only which has the nod for its Commonwealth Games debut.

Chaffey, whose world championship displays to win five titles since 2009 on the Gold Coast has given him legendary status in the sport, showed that even on limited training he is still a superb athlete, winning today’s PT1 race in a sub-60-minute time of 59.45 ahead of Scott Crowley (SA) 1:05.03 and fellow Gold Coaster Beveridge 1:05.20.

“It’s great to back racing again after Rio and even though I’ve only had 22 days training I was glad to get a hit out under my belt,” said Chaffey, a policeman who is now spending time in Sydney training to become a prosecutor.

“It will be a different story in April when the rest of the world comes to the Gold Coast – that will be a whole different ball game.”

Chaffey said the countdown to the Commonwealth Games would be amazing.

“Having the Commonwealth Games coming back to Australia and to the Gold Coast and being a Gold Coaster I can’t wait,” said Chaffey.

Tapp, who was forced out of the Australian Athletics team for Rio when burns to her leg didn’t heal in time, will be the front runner for the PT1 selection for the Games and will also throw her hat into the athletics ring again, for the marathon.

“I’m going to try and get to the Games in two sports, why not,” said Tapp, after her impressive win today, “you’ve got to be in it to win it.”

They joined over 1000 age groupers who all converged on the Robina course -stretching the races to their absolute limits as triathlon took over the surrounding Robina roads and foreshores.