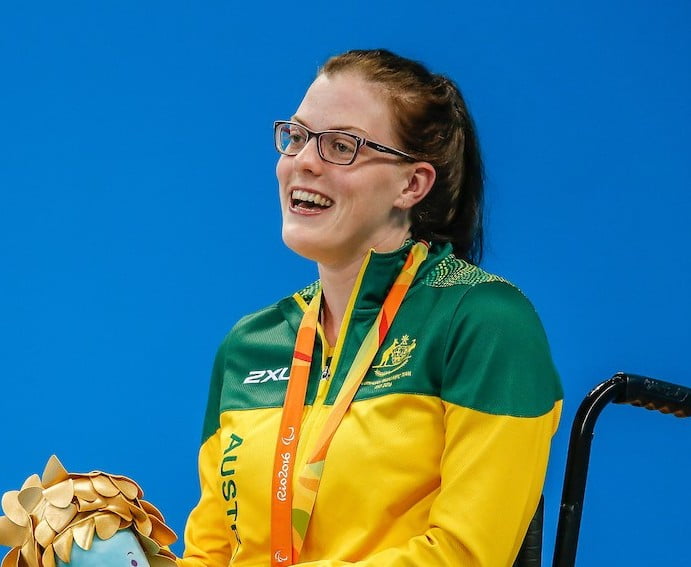 Australia has wrapped up its swimming campaign at the 2016 Rio Paralympic Games with a gold medal to Rachael Watson – finishing the meet with a total of nine gold, 10 silver and 10 bronze medals.

The 24-year-old from Brisbane, who suffers from cerebral palsy and motor neuropathy following Guilain-Barre Syndrome, became the first Australian Paralympic swimmer classed S5 or below, to win gold this millennium, setting a new Paralympic record of 40.13 in the women’s S4 50m freestyle.

“I’m extremely overwhelmed and very excited. It was a really hard race, but to come away with a gold medal is absolutely amazing,” said Watson.

“It’s the first race that I’ve done where someone has been that close. It was really good that I could see Miranda and it just meant that I had to push it a bit harder, and I didn’t even know when I touched the wall what position I came, but the fact that I won, when they told me was amazing.”

And what will it feel like to sing the anthem atop of the medal dais?

“I’m probably going to cry, the emotions will hit me and I’ll probably be a blubbering mess,” said Watson.

“It’s a pretty special moment, so I’m just going to soak it in, because who knows if it’s ever going to happen again.  I will be singing it loud and I’ll have no voice at the end of it.”

Cue tears, and cue a young woman Australia can be extremely proud of.

The final race of the night, also nearly brought the house down with Brazil just out touching Australia for bronze in the men’s 34 point medley relay. The Aussie team of Timothy Hodge, Rick Pendleton, Brenden Hall and Matt Levy missed the podium by just half a second, with the locals lifting the roof and celebrating the gold like bronze.

The first medal of the night, and her sixth overall, went to Lakeisha Patterson winning bronze in the women’s SM8 200m IM in a time of 2.32.22. She will leave Rio with two gold, three silver and one bronze, while teammate Maddision Elliott finished sixth, capping off a fantastic meet where she picked up three gold and two silver medals, as well as two world records. AIS based Jesse Aungles finished sixth overall in the final of the corresponding men’s 200m IM.

Katja Dedekind then won her first medal of the meet when she came home strongly to take bronze in the women’s S13 100m backstroke in a personal best time of 1.12.25. Jenna Jones also swam a PB to finish seventh in 1.15.14. In the corresponding men’s event, Sean Russo finished fifth overall in another PB of 1.01.43.