Triple silver and a bronze in the pool 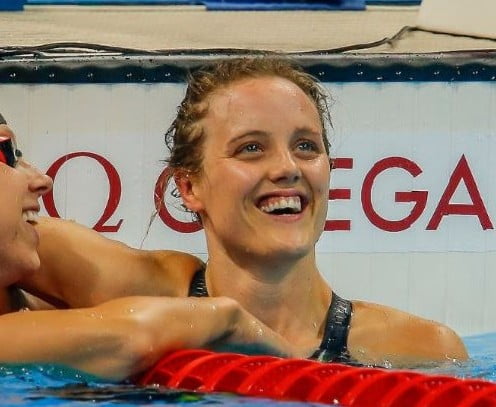 Silver was the new gold at the pool on night six of the Rio Paralympic Games, with the Aussies winning three and a bronze, to take their total medal tally to 18 with four days remaining on the program.

Timothy Disken, Ellie Cole and Maddison Elliott all won silver medals, while Matthew Levy picked up a bronze in the men’s SM7 200m IM, in another strong night for the Australian team.

Fresh from his gold medal in the 100m last night, Disken was just 0.04 from another top of the podium finish in the 50m free, in a race where just 0.05 of a second separated the first three.

The AIS athlete hit the wall in an impressive 25.99 and will now switch his attention to the men’s relay tomorrow morning.

“I’m really happy with the last three days and I’m just going to try and back up for the relay tomorrow now,” said Disken.

“I just wanted to go out there and have fun, and enjoy that race, because I did what I set out to do in the 100m last night. “

“That helped me be a bit more relaxed and I think I got a little bit more out of myself than I would of otherwise, so really happy with that race.”

Minutes later, Ellie Cole won silver in the women’s S9 50m free in a time of 29.13 with Games rookie Emily Beecroft finishing strongly to hit the wall in 29.33, just a fingernail away from bronze. Ashleigh McConnell finished seventh in 29.63.

“The 50 freestyle is always down to the touch and it’s one of those races that you don’t know what you’ve done until you finish,” said Cole.

“I’m really looking forward to the end of the program. We have our two relays and Australia just love relays, and it’s one of the reasons why I really enjoy swimming and then I’ve got the 100m backstroke at the end. I’m going into that ranked second but do have the world record so its going to be a really tight race.”

Maddison Elliott also backed up from a gold medal earlier in the meet to take silver in the Women’s S8 100m backstroke in a time of 1.17.16, with Lakeisha Patterson fourth in 1.18.12.

“I just wanted to do a good heat time and then go faster in the final, and I ended up with a silver medal from an outside lane, so that’s pretty cool,” said Patterson.

“I got a gold on night four and now a silver to add to the collection on night six, so hopefully there are a few more come.”

Matthew Haanappel opened the night for Australia in the men’s S6 400m freestyle finishing sixth in a time of 5.28.95, while Rowan Crothers swam a new personal best in the S10 100m free to finish fifth in 52.17. Jesse Aungles was seventh in his final of the men’s S8 100m backstroke.

The swim team have now won a total of 18 medals, including four gold, seven silver and seven bronze, but the more telling stat is probably the personal best count, which now sits at 61 PBs over the first six days of competition.