Tesch and Fitzgibbon to extend their reign 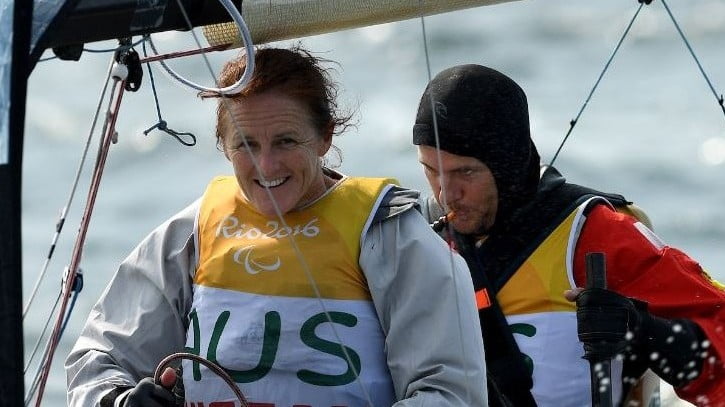 Tactically and technically they have proven comprehensively that they are the best duo in Paralympic sailing. Yet, Dan Fitzgibbon and Liesl Tesch believe it’s their typically Australian ability to have a laugh at themselves which has got them across the line at the Rio Games.

Fitzgibbon and Tesch became the first sailors to defend a Paralympic gold medal when they took out the SKUD18 two-person title in the waters off Marina da Gloria on Friday [Saturday morning AEST], securing an unbeatable lead after the ninth race of the 11-race regatta. Canada, Great Britain and Poland will battle it out for the minor medals way back in the Australians’ wake.

The victory – which was built on a stunning eight wins from 10 races, and two second placings – was a fitting end to an extraordinary couple of careers.

“What a way to retire,” said Fitzgibbon, who won silver in Beijing and gold in London.

“Couldn’t do better than that. A perfect 10 out there, two seconds in a whole week, we have to be content with that. We’ve done as much as anyone could have done. We’re happy. Ride off into the sunset for us.”

That’s been the tone of their sailing relationship.

As Tesch describes it: “Even this week we’ve had a whole lot of hiccups go on behind the scenes. But I think our sense of humour and our enjoyment of the sport has probably pushed us beyond what’s happened.

“All those conditions that are getting flung at us from all sorts of directions out there on the bay, we’re just so adaptable and able to do it. We’ve sailed here a few times, we’ve done lots of hours on the boat together – it nearly killed me – we’ve really put in some hard yards before we got here. It pays off.”

Fitzgibbon says: “The thing is we adapt to everything, craziness, stability – we deal with everything and come out on top. We just enjoy sailing.”

He paid tribute to the highly skilled team behind him.

“We’ve got the best support crew around,” he said. “We’ve got a great coach, Geoff Woolley, [boatman] Tim Lowe – Tim’s been with me since the silver in Beijing and he’s put in more hours than anyone else. He’s such a great and important part of our team, we couldn’t have done it without him. Yachting Australia supports us really well. It all goes together.

Tesch added: “I think the whole program that we brought over to Rio – we piggy-backed on our Australian Olympic team and I think we really benefitted from the resources and advice from the guys who’ve done the same courses in race competition.

“It’s been different actually out here racing, as opposed to training, but the benefits we’ve had from our own teammates – swapping courses everyday and getting loads of feedback from those guys and then having the feedback from the Olympic geniuses back home – has been invaluable.”

Australia’s yin and yang pairing will enjoy their final race together tomorrow before accepting their gold medal about 5pm Rio time.