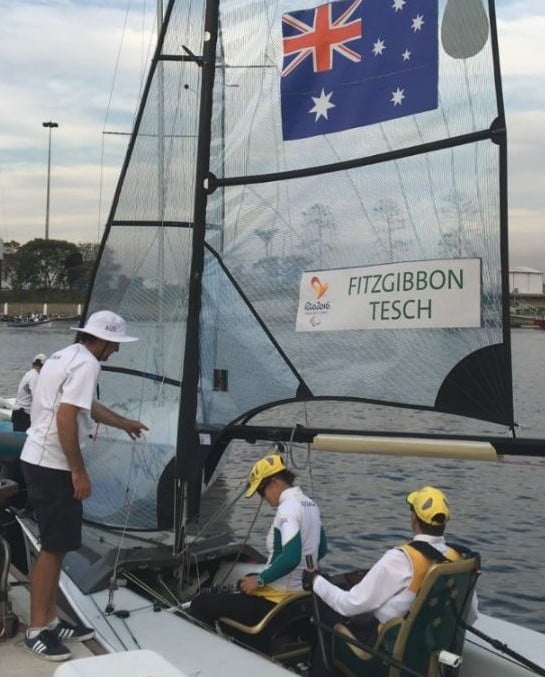 The chair from which champion sailor Dan Fitzgibbon navigated his dominating victory at the Rio Paralympic Games is a triumph of hi-tech ingenuity more than a decade in the making.

Fitzgibbon and sailing partner Liesl Tesch became the first team to successfully defend a Paralympic title when they claimed the gold medal in the SKUD18 class with two races to spare, finishing the penultimate day with a near-perfect eight first placings and two second placings. The win was the result of several factors, not least the consideration and expertise that went into building Fitzgibbon’s chair.

The 40-year master yachtsman became severely impaired after an accident on a jetty when he was 21. His knowledge of sailing continued to grow, but he needed assistance to be able to execute it on the water. Into the picture came boat maker Tim Lowe, who has been employed by the Australian sailing team for six years but has worked with Fitzgibbon for over 10 years.

“In the early days that Dan was racing these boats we were just using a go-kart seat and the steering was by rope,” Lowe explains.

“It had these really awkward switches that Dan figured he could lift, but he just doesn’t have the dexterity to do it, so he’d get stuck on one side, the crew would have to turn around and push his hand down. It was pretty hard. It kept them pretty busy.”

Fitzgibbon used that system at the Beijing Paralympics where he won a silver medal. However, in 2010, the Australian Paralympic Committee provided funding which allowed Lowe to begin work on the first generation of the current chair.

Instead of aluminium, Lowe and his team used carbon. They created a rod-steering system and a ‘sip-and-puff’ mechanism commonly used by highly impaired people to manoeuvre the chair from side to side. The chair in the current boat was completed last year.

“It’s a carbon bucket-chair that’s been made to suit him,” Lowe says.

“It’s got tie-down points to strap him in. It pivots and has a steering function. We just used parts we could buy, like some off-the-shelf pre-made carbon fibre sections inside the chair to make it strong enough – when the boat leans, and if he’s down, there’s half a ton of load to push him back upright, so it’s got to be incredibly strong.

“He uses the sip-and-puff to lean the chair. He steers manually using his biceps.”

The chair also has a marine display from a mounted camera, and a compass.

“We’re pretty happy with it,” Lowe says. “You’ve got to remember that the chair has to be strong to withstand the conditions, the loads it takes on and be easy enough to get him in and out. Most importantly, it has to be safe enough that it’s not going to break. It allows Dan to sail to the best of his ability, with the confidence that he can depend on it.”