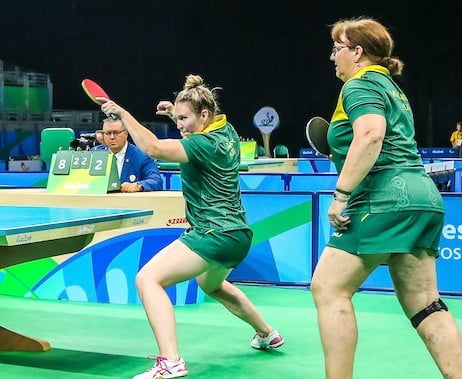 Australia has missed its last opportunity to secure a second medal in table tennis in Rio, after the women’s class 6-10 team was defeated today in the bronze medal match.

The team, comprising of two-time Paralympian Melissa Tapper and debutant Andrea McDonnell, went down to Brazil 2-0 against a roaring home crowd.

Despite the loss and leaving the Games without a medal, Tapper said: “We did the best we’ve ever done in doubles, so I’m really proud of our achievements, even if we didn’t win a medal.”

Having no expectations of a medal in this event, Tapper said their main achievement was their improvement as a pair, and their result is a milestone on their road to the World Team Cup next year and Tokyo in four years time.

“Last time we played Brazil, we lost 3, 4 and 4, so today was absolutely an unbelievable achievement,” said the 26-year-old.

“The match pushed us, but we hung tough so well. To come back in that fourth set 8-10, shows we have the ability to do really well as a team.”

Speaking about the overall tournament for her and McDonnell, she commented that their quarter final match against Brazil was a turning point for the duo.

“The match against Turkey was really big for us. To be able to beat Turkey who again, we lost to in Europe the last time we played them, means our little team of ours is improving.”

“There are World Team Championships next year, so that’s really exciting.”