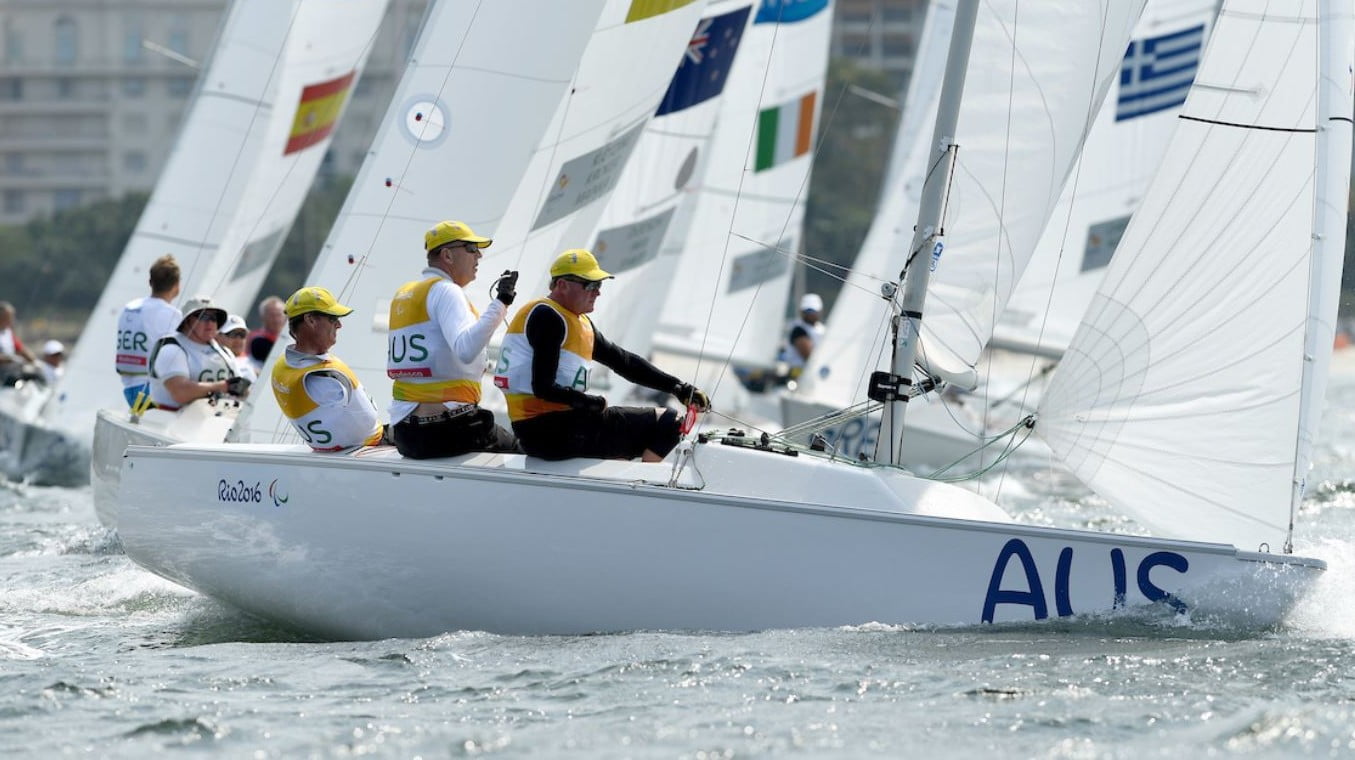 Podium finishes have been plentiful over the past three years for the Australian Sonar crew of Jonathan Harris, Colin Harrison and Russell Boaden. But this time they’ve got top spot.

After claiming first place in race 10 – their third of a gruelling Paralympic regatta – the three close sailing mates were jubilant on the dock at Rio’s Marina da Gloria having secured a gold medal with a race to spare. On the waters of Guanabara in Rio on Saturday [Sunday morning AEST] they will fly the flag for their country, their team and Australian sailing one last time before accepting the ultimate prize for years of dedicated hard work.

“It won’t sink in I think until the medals appear. It’s just elation. It’s been a long time coming and it feels great to get there,” said crew member Colin Harrison, a veteran of four Paralympic campaigns.

“I think the Australian sailing team has the best work ethic, culture, support – everything going on in the background is all about achieving success. That’s what we felt over the years, and that’s why we’re here today.”

“I think what’s been frustrating is that in the past three years we’ve been on the podium but never actually got the top,” crewman Jon Harris said.

“We’ve always been a point or two away. It’s been frustrating but, you know what, this is the one that just obliterates all those memories. And being the last Paralympics for sailing, it’s a good one to win. And it was pointed out to me that the first Paralympics was won by an Australian team and it’s nice that the last is won by an Australian team.”

Each crew member paid tribute to the team around them.

“They seem to be there to get rid of any obstacles you might have to sailing well. To me, that’s a great thing,” Harris said.

“A lot of teams have rules and processes and, of course, our team does too. But at the end of the day, there’s this other factor, which is ‘How can we help you guys win races?’ That has really helped us do things.

Crewman Russell Boaden said “There are a lot of people in the background who did a lot of work for us. We’re pretty lucky to have that amount of knowledge and support behind us.”

The Sonar crew will sail their final race of the Rio campaign at 12.05pm local time. The two-person SKUD18 crew – who have also sewn up a gold medal – start at 1.05pm and Matt Bugg, in the 2.4mR class, starts at 2.05pm in his quest for a maiden Paralympic Games medal.