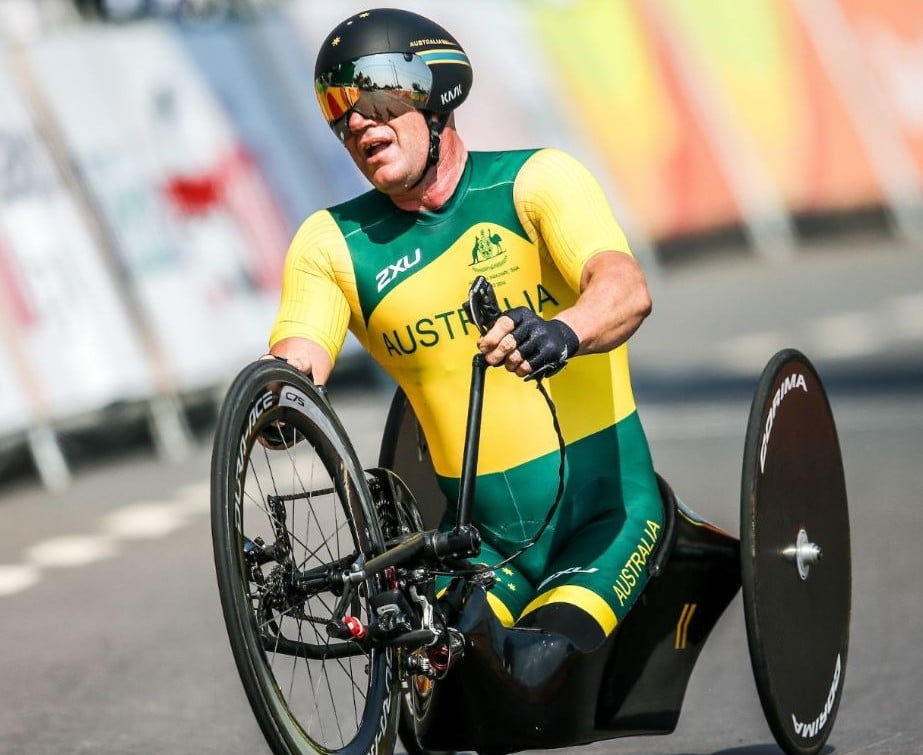 The Australians claimed three silver and two bronze medals before Carol Cooke capped off the day with a gold medal in the final event.

Cooke successfully defended her London crown in the 15km T2 event although she wasn’t sure she had even claimed a medal when she crossed the line.

“I’m still a bit overwhelmed and I’ll probably start crying again because I didn’t actually think when I finished that I won a medal ,” said an emotional Cooke after the race.

“I’m five time world champion in the time trial so you really put a lot of pressure on yourself but I hope everyone still realises that we all put in 100 percent, more than 100 percent, no matter where we place on the day.”

Cooke has multiple sclerosis which does not respond well to hot conditions but the team had a strategy in place to combat the impact of the weather.

“Heat is really bad and it makes the symptoms a lot worse and today when the guys this morning were saying it was really hot out there I thought ‘Uh-oh’,” Cooke said.

“But I was covered in wet, cold, iced towels right the way to the start and then cloud came over and it cooled right down.

“It felt good, I was really prepared to do it exactly the way I did it,” she explained. “Go with the wind and just go fast and then really try and power home.

“It’ll sink in over the next couple of days that I’ve done it again four years later and I didn’t even know if I’d be here.”

Track pursuit silver medallist Sue Powell was first to post a result today with bronze in the C4 classification. She completed the 20km distance in a time of 30:19.29 to be 33 seconds off the gold medal time of American Shawn Morelli and four seconds slower than Megan Fisher also from the US.

“I’m very proud of myself,” said Powell. “I pushed it hard out there and thought I was gone with five kilometres to go so I had to dig really deep to finish if off.

“I found the heat quite oppressive and on the second lap there it really started to get to me,” she explained. “It was a hot headwind to push back into and I came so close just to sitting up, I didn’t think I had any more left but I came around the dogleg and couldn’t see anyone behind me so I thought I might actually have a chance so I dug that little bit extra to the finish line.”

That little bit extra kept her clear of team mate Alexandra Lisney who was nine seconds slower for fourth place.

An unexpected medal came in the men’s tandem time trial where Kieran Modra and pilot David Edwards put their track disappointment behind them to score bronze in the 30 kilometre race against the clock.

“It’s not something we expected,” said Modra noting the pair had targeted the pursuit for success. “We came in with great expectations and then hit an incredible low and then to claw ourselves back out of that out on the road is special.”

The pair clocked 35:09.06 and were 33 seconds off the winning pace of Great Britain’s Steve Bate and Adam Duggleby with the Netherlands (Vincent ter Schure and Timo Fransen) claiming silver.

Modra is contesting his eighth Paralympic Games and his fifth as a cyclist. He has won five gold medals since 1996 but admits this one was especially tough.

“I’ve never been in a race where I’ve got over the line and absolutely vomited,” said Modra. “Poor Dave copped some of it and I feel really bad.”

But Edwards says it was worth it for him to experience the podium.

“So unbelievable and funny how it goes,” explained Edwards. “We came in as reigning World Champions in the pursuit so we had such high expectations but after that all expectation dropped and I lost all hope (of a medal) so did not expect to get it in this.

“I can’t describe it, such a relief but an amazing feeling to get something back for the effort, all the work we’ve put in and all the work in the background by so many people that is what this is for.”

In the men’s H5 over 20 kilometres Stuart Tripp delivered a breakthrough performance to come within 2.74 seconds of former F1 driver Alessandro Zanardi of Italy who claimed his third Paralympic hand-cycling gold medal.

“To come second by a few seconds to the great Mr Zanardi and for it to come down to the wire it’s a good day,” said Tripp.

“I’d like to thank my competition because it wouldn’t be an event without competition and those guys are awesome athletes and so happy to be up with them in this category,” said Tripp who was moved to tears when thanking his wife, family and friends for their support. “(Para-cycling Head Coach) Peter Day said to me before I went out that if there was ever a course for Stuart Tripp it was this course here. It only had a few corners to go around, I’m very good into the wind, flat course so made for me to do something special and we did.”

The C5 30 kilometre time trial result was a repeat of the pursuit on the track with  Alistair Donohoe claiming silver behind Ukrainian Yehor Dementyev who was 40 seconds faster than the Australian.

“The time trial goes for a long time so you have time to think about how you are going and then you finish and you are clueless as to how you have gone,” said Donohoe.  “Then you have to wait and wait and then some Brazilian tells you you’re second and it’s a huge relief.

“Not first but not fourth either,” he said. “You sit there and think have I given everything and the answer is definitely yes and then you think is there anything else I can do and you say ‘No’,  so you just pray to God it was enough to get you across the line.”

Australia’s final silver medal of the day was won by Kyle Bridgwood who, like Donohoe, was beaten by the same man who defeated him for gold in the track pursuit. Slovakian Jozef Metelka clocked 37:52.84 for the 30 kilometre distance with Bridgwood 30 seconds off the pace.

“I’m stoked with the silver medal although I was hoping for a gold but he’s got me again,” said Bridgwood. “Wished I could have gone a bit quicker in the second lap but I’m pretty happy with two silver medals.

“It means a lot of hard work is paying off I suppose.”