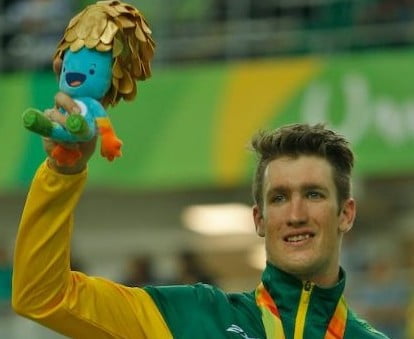 The Paralympic cycling campaign hits the road tomorrow with 12 Australians in action in the time trial events at Pontal.

David Nicholas in the C3 and Carol Cooke in the T2 both line up as reigning Paralympic champions and both are primed to defend their crowns.

It will be the first race for Cooke in Rio while Nicholas heads to the road after last week winning a gold medal in the pursuit on the track.

“The win has taken the pressure off a bit but for tomorrow I am going to put pressure on again like I haven’t won the gold in the pursuit and see what I can do,” said Nicholas.

“I am actually pretty calm but tomorrow morning the nerves and the butterflies will be there for sure.”

The Australians tested out the course today in searing heat and humidity and that suited Nicholas just fine.

“I love the heat!” said the North Queensland native. “Coming from Proserpine I train in the heat almost all year around.

“The course is nice and fast so that suits me coming from the track but I do like some technical sections like there have been for the past two world titles I have won and this course is not technical at all,” said Nicholas. “Riding along the beach where the TT course is beautiful. I hope I don’t get distracted.”

“I’m pretty confident about it,” said Bridgwood who was second in the pursuit on the track. “It (silver medal) gives you a bit of confidence in how your form is going and you can see who’s probably in best form for it.

“Today was the first time we could ride the course with a closed road and that was really good,” Bridgwood explained. “To see how the corners would be when it’s closed and how fast to take it and to get a real feel for it.”

Bridgwood agrees with Nicholas that the course is fairly straightforward heading up the beach road before a u-turn back to the finish line.

“I’m also looking forward to it being hot,” he said. “I was hoping it would be the same as today (36 degrees) because there are a couple of people who probably don’t like the heat and won’t be able to handle it as well as the Australians.

“Hopefully I can come away with a win but all you can do is your best.”

In the other women’s events pursuit silver medallist Sue Powell and Alex Lisney will race in the 10km C4 event. Powell was world champion in the road time trial in 2011 and the silver medallist in London while Lisney placed second at the 2015 worlds in Switzerland.

The women’s C1-2-3 class is also over 10km and will feature Simone Kennedy and Amanda Reid. Kennedy was on the podium in third place for both the time trial and road race at the 2015 worlds and is hoping to step up again in Rio. Reid, meantime, claimed track silver over 500 metres and has not contested this distance at international level before.