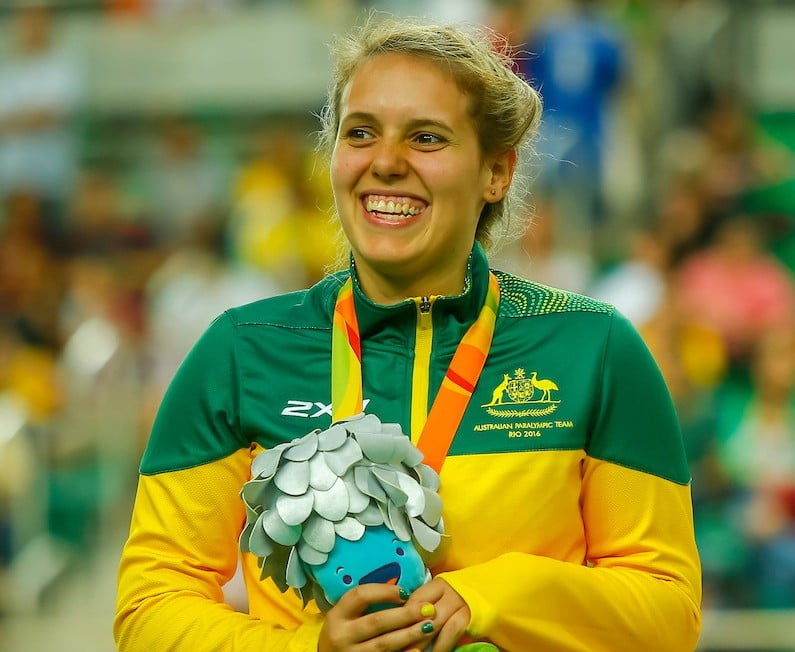 Sydney cyclist Amanda Reid has posted a personal best time to claim the silver medal in the C1-2-3 500m time trial at the Paralympic Games in Rio.

The 19 year old C2 competitor was the second from last on the start order and she flew over the two laps to clock 40.354 seconds slashing two seconds from the C2 Paralympic Games record.

In a combined event times are adjusted based on classification and after factoring Reid’s time was posted as 37.581 which put her first with one rider to come.

“It’s just incredible. I looked up at my time and I was shocked,” said Reid. “I thought ‘Wow, I’ve got a Paralympic track medal’.

“I didn’t really think about what I was going to do I just went out and rode the best I could and tried to beat my personal best,” she said. “That was the best ride I have ever done.

“I had a little bit of nerves and then they went away when I got in that start gate because I knew what I had to do.”

Alyda Norbruis was the last out of the gate and the Dutch woman eclipsed the mark she set in 2015 to win with a world record time of 39.631 factored to 36.908 for the gold medal result. China’s Zhenling Song was third with all the podium places claimed by C2 cyclists.

Rio is Reid’s second Games after London where she was fifth in the 100m breaststroke in the pool. She switched to cycling a little over a year ago.

“I got bored with swimming so I looked for another sport and I really enjoy cycling, I just absolutely love it,” she said, while admitting the transition was challenging.

“It wasn’t that easy to start off with,” she explained. “I had to learn how to ride a track bike again but I had a great support network around me.

“I want to be stronger and better (and) I am definitely aiming for Tokyo.”

Reid’s compatriot Simone Kennedy in the C3 classification rode a personal best time of 44.961 to finish ninth in her second effort after pulling her foot in her first attempt forcing a restart.