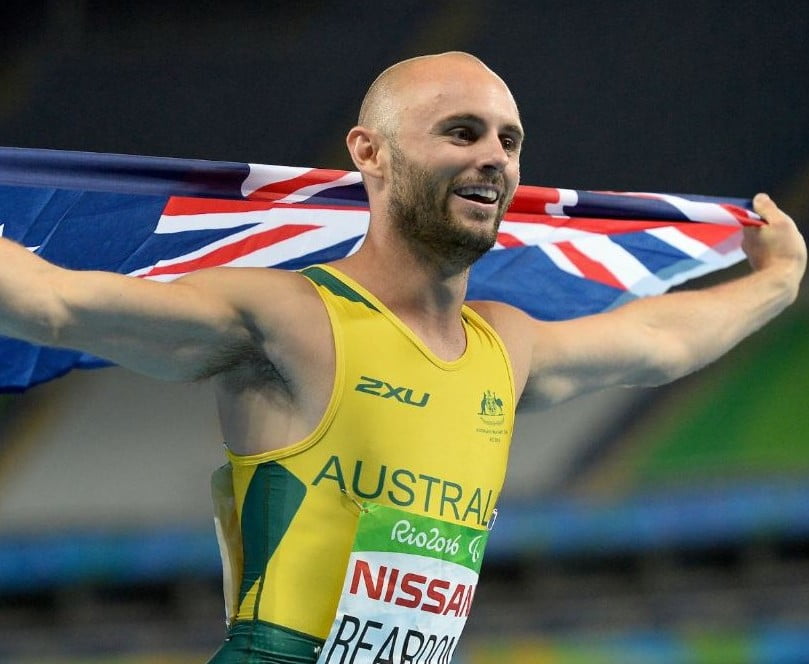 Two-time world champion Scott Reardon has now added ‘Paralympic champion’ to his list of achievements after winning the 100m T42 final for his leg amputee class on the Rio athletics track.

Reardon clocked 12.26 seconds – equalling his new Paralympic record he set in Wednesday’s heats – to beat Denmark’s Daniel Wagner and Britain’s 200m winner Richard Whitehead, who dead-heated for silver with 12.32s. There was no bronze medal awarded.

For Reardon, it was his career ambition to stand on top of the Paralympic podium. He took silver in the 100m in London to Popow but had won the event twice at the 2105 (Doha)  and 2013 (Lyon) world titles.

“I think it might take a few days to really truly sink in what being a Paralympic gold medallist feels like. But I’m extremely proud of not only myself, but my coach and my friends and family.”

Coach Iryna Dvoskina now has medallists in all three colours in her charge – Reardon (gold), Evan O’Hanlon (silver) and Chad Perris (bronze) – all in the 100m but three different classes, amputee, cerebral palsy and vision-impaired respectively.

“I can’t thank Iryna enough. If you looked at me walking through the door, a 165cm, 55kilo guy and said ‘He’s going to be a Paralympic champion’ even I would have called you crazy.

“But somehow she saw that in me and was able to change that person into the person I am today – a Paralympic champion. It’s a pretty massive feeling right now.”

In other events, 17-year-old Victorian Jaryd Clifford was the youngest in the 12-man field by seven years for the 5000m final for combined vision-impaired classes T12-T13.

In fact the oldest in the event – Kenya’s Henry Kirwa, who won the gold – is 26 years Clifford’s senior. But he again held his own as he had done in the 1500m final two days ago and ended up with the same placing 7th.

It was a personal best 15min:06.64sec for Clifford by nearly three seconds and he maintained his level after a 7th at the 2015 world championships last October.

“At my age that’s only my fifth or sixth 5000 metre race so I’m still learning,” he said. “I definitely raced them as I had nothing left at the end.

“I want to do a lot more races and one day I might step up to the Marathon. That’s in the long-term plans though.”

Today he used his head as well as his legs, when Morocco’s El Amin Chentouf, Kirwa and Tunisia’s Bilel Hammami opened up a 50-metre gap in the first lap. After six laps it was nearly 100 metres.

“Those three guys went off hard from the start and I just thought I’d play it safe and stick with the second pack. Then they went out hard and some of the lead guys started to fade so I caught a few.

“I think I was almost last at one stage but I was able to work my way through from the back of the field. It was hard but was worth it in the end as I set my best time by a few seconds.”

Now the 2017 world titles in London and the 2020 Paralympics are in his sights.

Javelin thrower Jayden Sawyer was in bronze medal position for the men’s F38 final for his cerebral palsy class. The 22-year-old’s best throw was his third (45.63 metres) but he was overtaken by the Chinese and Iranian athletes to finish 5th.

It was his third top finish after a fourth and a bronze in the last two world titles (2015 and 2013). But he was disappointed with the distance being a metre-and-a-half below his season best.

“It was a great atmosphere but today I just wasn’t at my best,” he said.“Coming out I moved well on the runway but I was working on pretty minimal sleep.

“I lost it when I went to bed last night… my head just got in the way. I was thinking too much about the day ahead.

“I must have had no more than an hour, so that didn’t help. It is what it is.”

But at his first Paralympics, Sawyer takes a lot away from his maiden Games.

“Experience. I’m always looking to better myself. I’ll go back home, work harder and come out better next time. London was always in my plans. But now I definitely can’t wait for that one,” he said, with a dose of redemption in his voice.

Madison de Rozario finished 4th in the women’s 5000m T54 wheelchair class, which became the fifth time an Australian has finished one shy of the medals in athletics in Rio.

Field thrower Claire Keefer was not able to repeat her bronze from the F41 shotput, in the discus today with a 7th.

But she hurt her back after her third throw – her longest – of 23.27 metres and left the nets in a deal of pain. Australian medical staff were called in to assist.

Better news happened in the final relay of the night, the 4x100m for T35-38 athletes with cerebral palsy, with Ella Pardy, Isis Holt, Jodi Elkington-Jones and Erin Cleaver taking bronze behind China and Great Britain.

“When I got the baton I knew everyone was behind me and I just took it home,” Cleaver said.

Elkington-Jones added: “I never dreamt of this … to come home from my second Paralympics with two medals. I’ll go home and relax a bit and then get ready for the world championships in London next year.

“We want to keep this team together and go for it again.”