Gold, gold and white gold for Aussie women in the pool 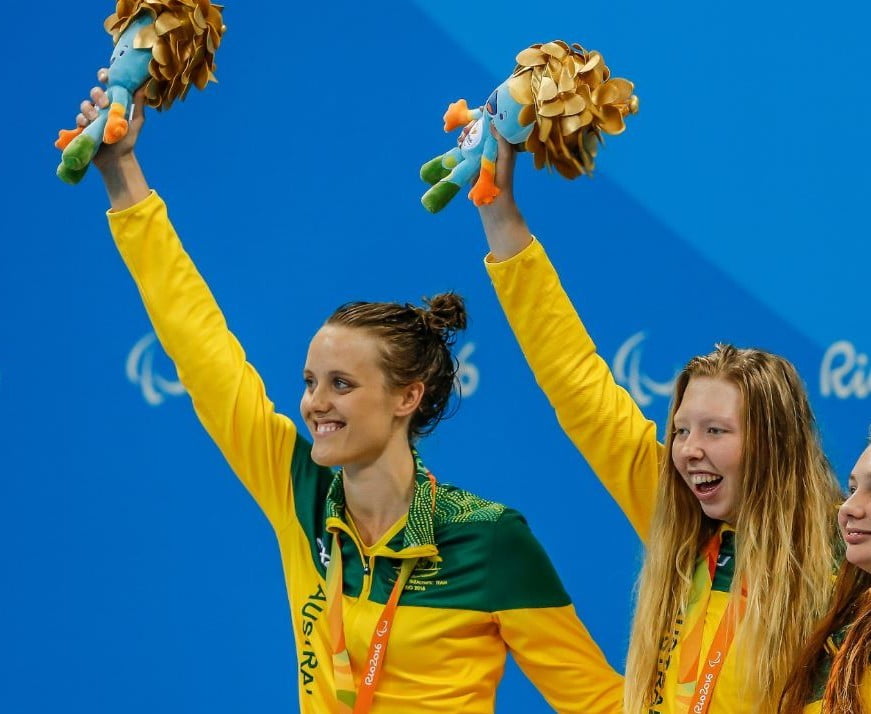 In an emotional night in the pool at the Paralympic Games, the Aussie women have stolen the show with a gold medal and world record in the relay, a gold meda to 15-year-old Tiffany Thomas Kane, and white gold to Monique Murphy, a young women who almost lost her life, 900 days ago today.

Reigning Paralympic champions in the women’s 34 point freestyle relay, the team of Ellie Cole, Lakeisha Patterson, Maddison Elliott and Ashleigh McConnell set a new world record on their way to back-to-back titles in the event, following in the wake of Australia’s Olympic freestyle team.

Led off by Cole, Patterson and Elliott extended the Aussie lead with McConnell bringing it home for her first medal of the Games, in a time of 4.16.83, more than three seconds better than Australia’s own world record set in London.

Thomas Kane won Australia’s fifth gold medal in the pool with a commanding performance in the women’s SB6 100m breaststroke.

The world record holder in the event, Thomas Kane swam over the top of Charlotte Henshaw from Great Britain, to set a new Paralympic record and win gold in a time of 1.35.39.

“I’m feeling so happy and shocked. I wanted to win that medal and I wanted to get the gold, and just to think that it’s mine I’m just really happy, I can’t believe it,” said Kane.

“Through the swim I was very nervous, considering it was my main event, but I just wanted to try my best and do my best time. I was thinking of breaking my world record, but considering I’ve done so many races I was a bit buggered. But I’m just so happy to think that the gold medal is mine and that I did it.”

Silver can be just as good as gold, white gold perhaps, and for Monique Murphy, the accomplishment of standing on a dais at the Paralympic Games is just another step in a remarkable journey since March 29, 2014 – the day her life changed forever.

“This is the best thing that has happened to me in the last two years,” said Murphy.

“Two years ago I woke up from a coma and found out that I had fallen from a fifth floor balcony and I’d had my right foot amputated.”

“From there I went on to have about eight operations and an elective amputation below the knee, and since then it’s just been a whole lot of family support and rehabilitation, and I just didn’t think that in two years I’d be standing here at all. “

“An initially tragic event has turned into such a fantastic thing and to see my parents so happy in the stands, has made all the hard work worth it.

“Swimming was the lifeline. I was struggling a lot with pain and mobility and as soon as I got back in the water all my phantom pain pretty much stopped straight away. I had an outlet for the energy and had a goal each day to get in the water and accomplish something.”

“I would not be here at a Paralympics, but I wouldn’t be walking, standing, back at Uni, I wouldn’t have my life back… if not for swimming.”

In other events, Brenden Hall continued his strong meet to finish fourth in the men’s S9 100m butterfly, while Emily Beecroft and Madeleine Scott finished sixth and seventh overall in the corresponding women’s event.