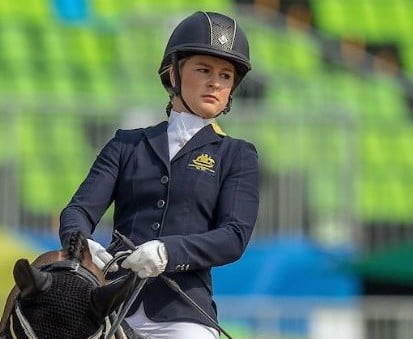 The 25 year old Victorian and her horse Zidane bounced back from a disappointing result in the team event, to score 69.914% and finish just 0.829 off the medals.

Booth says she was much happier with her ride in the individual event.

“I was riding, I think, a little bit more carefully, being a bit more aware that he might be a little bit more spritely than his normal self. But it felt really good and I’m really happy with it. It’s always good when you can feel such an improvement from one test to the next.”

Booth had a big group of supporters in the stands cheering her on at the Olympic Equestrian Centre.

“Yeah, that’s my family. They’re all here, they’ve travelled over. I’ve got my mum, dad, brother, sister, grandma, cousin, friend, everyone’s here. I wish I could have done a little turn around the long side to give them a little wave.”

It was Booth’s first Paralympic Games, and she says it’s been a bit of a rollercoaster.

“Up and down. Disappointing with the first test, just with him [Zidane] being a little bit out of character. But we both haven’t been in facilities as big as this, with an atmosphere as big as this.”

The Individual Championship Test Grade II was won by Great Britain’s Natasha Baker, with the Netherlands taking silver and bronze.

Great Britain took the gold, with Germany in silver and the Netherlands bronze.