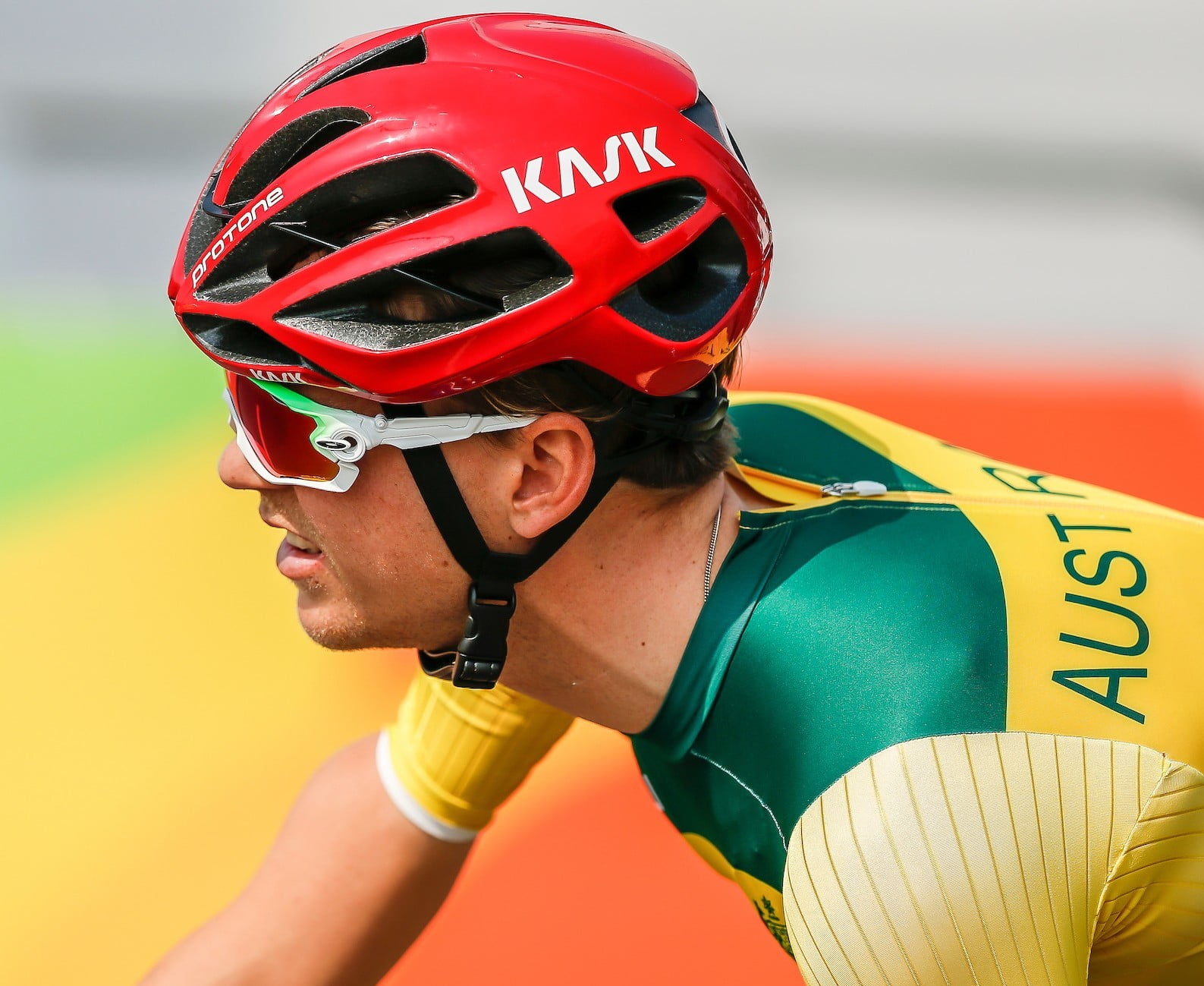 Victorian Alistair Donohoe was a Paralympic gold medallist for 15 minutes today before officials ruled against him in the men’s C4-5 road race that was marred by tragedy.

Iranian Para-cyclist Sarafraz Bahman Golbarnezhad crashed early in the race and later died in hospital but the riders had no knowledge of that as they raced over the course that wound it’s way along the coastline near the town of Pontal.

The finish of the 84 kilometre race came down to a sprint between Donohoe and the Ukraine’s Yehor Dementyev. But as the pair sped to the finish line Dementyev veered into Donohoe forcing them both to crash.

Donohoe quickly jumped up and ran across the line without his bike which proved to be his undoing as the rules state that for him to claim the win he should have carried his bike with him.

“I was unsure I had done the right thing but I just knew I had to get myself across (the line) and then figure out what to do,” said Donohoe.  “I was a bit confused because I’d just crashed.”

“It was an emotional roller coaster because I waited 15 minutes to figure out what the result was and then I got told they’d given it to me and then they later told me that technically they couldn’t find a loophole in any of the regulations or anything (to do that),” said Donohoe after receiving medical treatment.

“I’m devastated but I’m not actually in tears because I gave it my best go, it wasn’t my fault, there was nothing I could do about the finish and I did everything in my power to try and win,” he explained.  “In my eyes and in my family’s eyes that was enough.”

The official results list Donohoe in fifth, one place ahead of team mate Kyle Bridgwood who rode home two-and-a-half minutes after the winner.

“I guess what I can come away with is that I rode the perfect race and put myself in that winning position,” Donohoe said. “I had that bit of bad luck in the last 50 metres, in the last ten seconds of the two and half hour race and there’s nothing I could control about that.

“We executed the plan to perfection and if I had the time over again I wouldn’t have changed a thing.”

Donohoe has already claimed silver medals in the track pursuit and road time trial but as the two time road race World Champion, today’s event was a major focus of his Rio 2016 Paralympic campaign.

“I’ve been hanging out for this race since I got here and the two silvers are really good at a first Paralympics but that gold was right in front of me and I’ve been waiting and waiting and waiting and to think I had it almost in my grasp,” said Donohoe. “But to come away with two silvers at my first Paralympics I’ll look back on this and still think it’s an awesome achievement, I guess I just need to give it some time before I start thinking like that.”

Donohoe’s mother Amanda was at the race but there were ’20 fences between’ her and her son who was quickly in touch to reassure her he would be okay.

“I’ve been on the phone to Mum… (and) the family group message has been going ‘off chops’ with confusion, support, frustration but most of all love.

“They’re all behind me and they all see it as a victory and I think they’re just happy I’m okay and have come away with a bunch of grazes and no broken bones,” said Donohoe who is also sporting seven stitches in a puncture wound on his left knee.

Dementyev, who was disqualified and fined for causing the crash, was taken to hospital for treatment after a race.

“To see the other guy (Dementyev) who crashed get stretchered off and taken to hospital in a neck brace,” said Donohoe. “You look at me walking around and you look at him laying down and you think at the end of it there’s a silver lining that I can walk away.”

In the 72 kilometre women’s C4-5 Sydney’s Alexandra Lisney was the first Australian and the first C4 class rider to cross the line finishing in seventh place, seven minutes after C5 rider Sarah Storey from Great Britain who claimed her third gold medal for this Games.

The final event for the Australian Para-cycling team was the 99 kilometre men’s tandem with eight time Paralympian Kieran Modra and pilot David Edwards putting in a solid performance to finish fifth, 42 seconds off the gold medal time of Dutch pair Vincent ter Schure (pilot Timo Fransen) and the second place Spanish pair of Ignacio Avila Rodriguez (pilot Joan Font Bertoli). The Australians were only 12 seconds behind Britain’s Steve Bate and Adam Duggleby who rounded out the podium.

“I actually enjoyed it tremendously,” said an exhausted Modra after the race. “It was brutal but the legs were just great and when your legs are good and you can hurt well it makes the job a little bit more comfortable.

“But the hills are what really got us and wore us down gradually until the end,” he said. “I could feel my legs cramping up and Dave was like ‘Go harder, Go harder the Brits are 500 down the road!’.”

“We just put everything into it and 5th place is brilliant for us so I’m absolutely stoked,” said Modra. “I was really happy to ride with Dave and he did a fantastic job.”

For Edwards, who teamed up with Modra less than 12 months ago, the tandem road race was a new experience.

“The descents were just insane,” said Edwards. “I didn’t really know what to expect (but) tactically we played it smart.

“We can’t be any happier with that result, we went just absolutely full gas and just to be there at the end was a reward in itself,” said Edwards. “We don’t get a medal to show for it but the memory of this race, I’ll never forget that, ever.

The pair came to Rio with the track pursuit as their target event but they failed to qualify for the medal round.

“This one has been an incredibly challenging Games,” said Modra. “We came in with such great hopes, hit such lows and now we’ve come out of it in the road competitions and I think we’ve finished off very strongly and we can be proud of our efforts.”

Matt Formston and pilot Nick Yallouris also lined up and were with the main field until the last climb where they lost contact to ride home 15 minutes after the winners in 13th place.

The cycling contingent leaves Rio with 13 medals. Carol Cooke won double gold in the T2 road events and David Nicholas claimed gold in the C3 pursuit on the track. The team also collected seven silver and three bronze across road and track events.