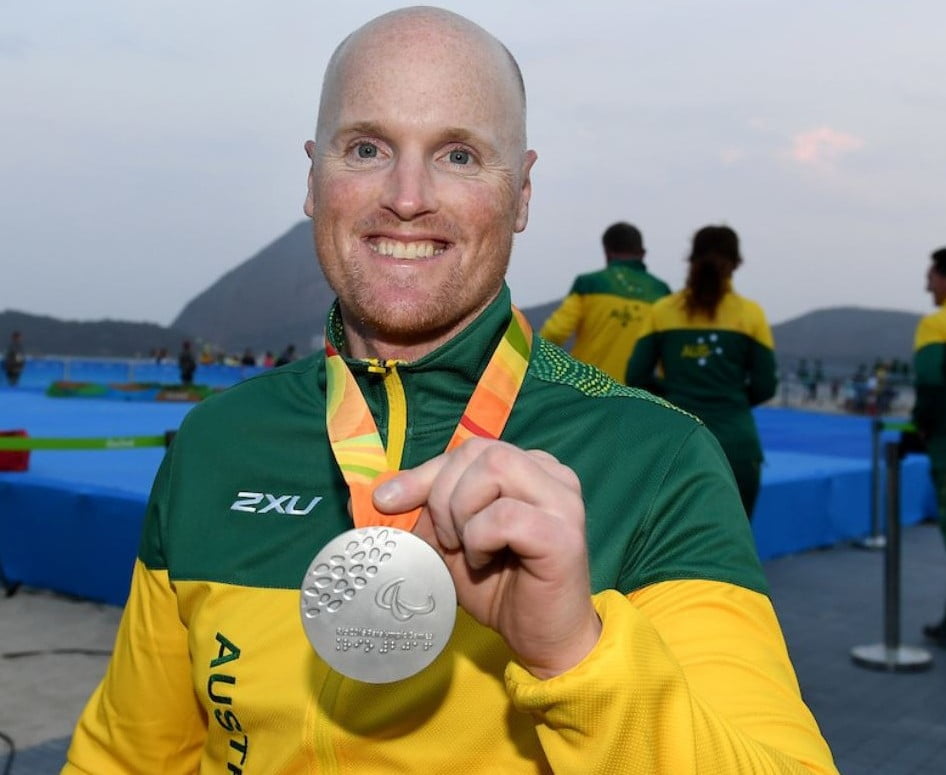 Shortly before Matt Bugg left for Rio – the culmination of an 11-year quest to become the best Paralympic solo sailor in the world – he had his 90-year-old grandfather sign his race hat.

Through that signature, he says, his pop is out there on the water with him as he takes on opponents and the elements.

But look a little deeper and it’s as if Bugg has been carrying an entire community with him in his charge towards what could be a stunning gold medal on the waters of Guanabara Bay in Rio.

Sailing in the tiny 2.4mR class can be an isolating experience. Yet, Bugg says he’s had so much help getting him to this point that if he were to achieve his ultimate goal, it would be a victory for a range of people, from those who manufactured his sleek boat, to those who coached and trained him, and even those who gave up their holiday time to sail against him.

“The Australian 2.4 class, we’re all a close group of friends … A lot of them have taken time off from their jobs and come down to Hobart to train with me and help me upskill for this regatta,” Bugg says.

“They’ve just been absolutely great. It’s hard to put a value on someone who takes a week off from work, leaves their wife at home and comes sailing to help me out – in the middle of winter, too.

“I sail the boat and make the decisions on the course. But most of the custom bits on the boat were built by my old man, my sails are made and designed locally by guys from Hobart, my campaign is very much Australian. All of the support I’ve had from people in Australia has been fantastic.

“And then there’s my pop who’s 90 and I got him to sign my race hat for me before I left, so I’ve got my pop out there on the water with me every day, which is pretty cool.”

The 35-year-old seized second place overall in Rio. He got better as the competition progressed, as he has been constantly improving since getting back into sailing after breaking his back in a skiing accident when he was 23.

“I’d done a lot of sailing growing up and when I had my injury I thought that the Paralympics might be a bit of fun,” he says.

“While I was in rehab I decided to have a crack at the Paralympics. I had no idea that it would be so hard, that it would take me the better part of 11 years to get here and to get into the kind of shape where I could possibly win a medal. If I’d have known it was going to take that long maybe I would have taken up something else! But I’ve loved every minute of it.”

Coach Richard Scarr says Bugg has put everything in place in order to achieve his best.

“I started working with him in 2010 and after London he really put his mind to preparing himself and his boat to try and podium here,” Scarr says.

“Over the last four years we’ve had to have plenty of those tough conversations to just try and get that extra 10 per cent out of every situation, everything we do, whether it was the sailing or the sails or his training – absolutely everything we did we picked apart and tried to work out how to get better.

“Like any athlete, he expects everything to be just right. He wants things to be exact and the effort he puts into detail and everything we do is no different to any Olympic class sailor. Our class is probably the toughest and he probably has to work the hardest. There really is no margin for error.”