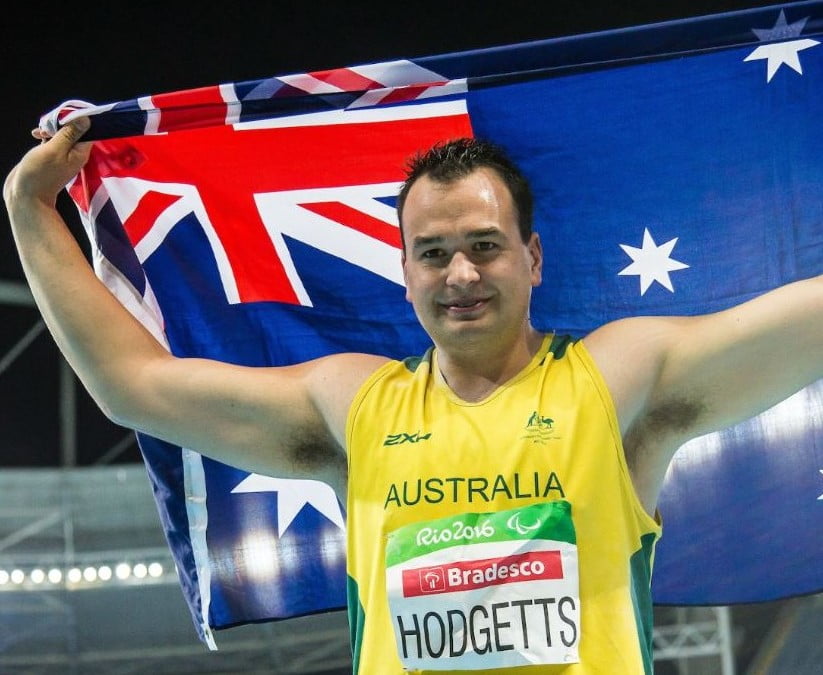 Six medals – five bronze and one silver – have now been won by Australia in athletics by the end of Day 3 of competition and a third of them came from Tasmania.

Things did not go all Hodgetts way though. He was the defending champion from the London 2012 Paralympics, the reigning world champion from 2015 and the current record holder (16.29 metres) heading into the F20 shot put in Rio for athletes with an intellectual disability.

But Malaysia’s Muhammad Ziyad Zolkefli let out a 16.40m throw in the first round to break Hodgett’s record and maintain the lead throughout the six rounds. Greece’s Dimitrios Senikidis (16.17m) took silver and Hodgett’s last throw of the night (15.82m) grabbed bronze.

The 28-year-old had been sitting in fourth position but found something within to unleash his biggest shot.

“This is not over. I’ll come back,” he said of losing his Paralympic title and world record in one night.

“I didn’t feel at my top. My technique was a little out. So I’ve got no excuses,” he added with the 2020 Tokyo Games already in his sights.

“I want to get better and stronger. I’m also going to make some changes to my training and my methods. It’s time for some fresh plans.”

For Kenzie, he had Tunisia’s Abbes Saidi in his sights in the 1500m T38 class for cerebral palsy. When the bell rang for the last lap the 20-year-old made his move and took the lead only for Saidi to catch him once more and take gold in 4m:13.81s.

But Kenzie held on for silver in 4m:14.95s with the large Brazilian crowd ringing in his ears. France’s Louis Radius took bronze.

“I’m pretty happy with that race. Obviously came in with the expectation of gold but you can never be too sure in a race like this,” he said.

“So to come away with a silver in my first Games with the whole experience of a huge crowd… it was just so surreal. I’m absolutely pumped at the moment.”

In other results, 19-year-old Rae Anderson was also at her first Paralympics like Kenzie but had the added bonus of Brazil’s world record holder Shirlene Coelho in her javelin F37 final for cerebral palsy athletes.

“I couldn’t hear myself talk that noise was so amazing,” Anderson said. “I’m really good friends with the New Zealand athlete (Caitlin Dore) in my event and we were right next to each other chatting away and having to shout.

“It was an amazing experience to compete alongside Shirlene (gold medal winner). She was obviously so proud to throw at home. I felt quite excited for her.”

But Anderson’s 28.46 metres for 5th place was a personal best.

“I’m so happy with that distance. It’s my PB by over two metres. The atmosphere played its part but I’ve also been changing a few things at training going for quality rather than quantity and that seems to work too.

“I’ve been doing a lot of different things like yoga to strengthen my base and core.”

Another of the 21 debutants on the Australian track and field team was Jesse Wyatt.

He was fourth in the men’s shot put F33 class, for cerebral palsy athletes, coming just 0.28m short of a bronze at his first Games.

“The crowd was really cool. I put out some good attempts there with the limited preparation I had. So I’m as happy as.”

Wyatt, 20, was one of the late call-ups to the Australian team due to the absence of the Russian team from the Rio Games.

Wyatt was fifth at the 2015 world championships so earned his spot in Rio as the next highest-qualified athlete.

“I’ll be looking forward to the world championships next year and just getting home and getting some work done.  I want to come back bigger and better next year.”

Nicole Harris took 7th in theT20 shot put (intellectual disability) after pushing as high as fourth during the 11-women competition.

“It was an awesome atmosphere out there – the Brazilians made it really fun,” she said. “They really get behind their own athletes but also the other countries as well.

Another near miss for Australia came with Sam McIntosh in the men’s 100m T52 wheelchair class. He finished 4th – one out of the medals – after some gutsy catch-up work down the straight.

“Unfortunately I slipped at the start so I didn’t have the cleanest getaway. But I thought I hung tough and came home pretty strong,” McIntosh said.

“I made my fist Paralympic final so I’m still pretty happy.”

After crossing the finish line, Switzerland’s Beat Boesch strayed into the Australian’s path causing him to flip over, chair and all.
“He started to wander out of his lane and before I noticed it, I was crashed over on my side,” he said. “The guy apologised. The chair got beat up more than me. But the team doctors will look after me.”

McIntosh had a grazed shoulder but the front wheel on his chair was bent out of shape.