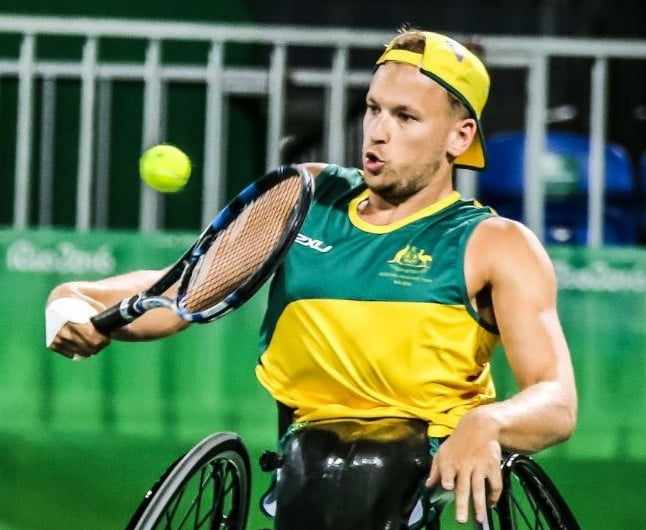 Dylan Alcott has qualified for the gold medal match of the men’s quad singles after recording a comprehensive 6-0 6-3 win over South Africa’s Lucas Sithole at the Rio Tennis Arena.

Alcott required just 51 minutes to dismantle the world number 3 and can now look forward to two finals in as many days, after his singles victory followed yesterday’s win through to the gold medal match of the quad doubles, with Heath Davidson.

Playing on Court 2, Alcott was a class apart from a nervous looking Sithole, who could find no answer to the Australian’s tactics, which centred predominantly on taking the pace off the ball.

Speaking after his win, Alcott said the straight sets victory had bucked the trend of their recent encounters.

“The last two times we’ve played it’s been three sets and I was really nervous heading in but when we started I just stuck to the game plan, I didn’t make any errors and the Paralympics is a different beast isn’t it?” Alcott said.

Sithole did improve as the match wore on, but with Alcott serving well and capitalising on break point opportunities (5 of 10), it was all too little, too late.

With a gold medal on offer in the men’s quad doubles tomorrow and a singles final to follow on Day 7, Alcott admitted that he was enjoying his time in Rio.

“I’m really enjoying myself as well to be honest, I’m lucky to be a Paralympian and I love being from Australia and representing Australia, and I’ve got all my friends and family here and I’m humbled to do what I do,” Alcott said.

Addressing his plans to keep focused ahead of busy 48 hours ahead, the triple Paralympian indicated that sticking to process would be his main aim.

“I just try to enjoy the moment as much as possible, enjoy the tennis and that hopefully means I play well. I think when people enjoy what they do, they often perform better, I’ll just try and stay as relaxed as possible.”

Earlier in the day, Adam Kellerman’s campaign at the Rio Paralympics in the men’s open singles came to an end after he was defeated in straight sets by Argentina’s Gustavo Fernandez 6-1 6-2.

Kellerman – ranked world number 12 – gave a brave account, particularly having prepared for Rio with a shoulder complaint, but Fernandez at world number 5, showed too much class in blistering heat on court 9.