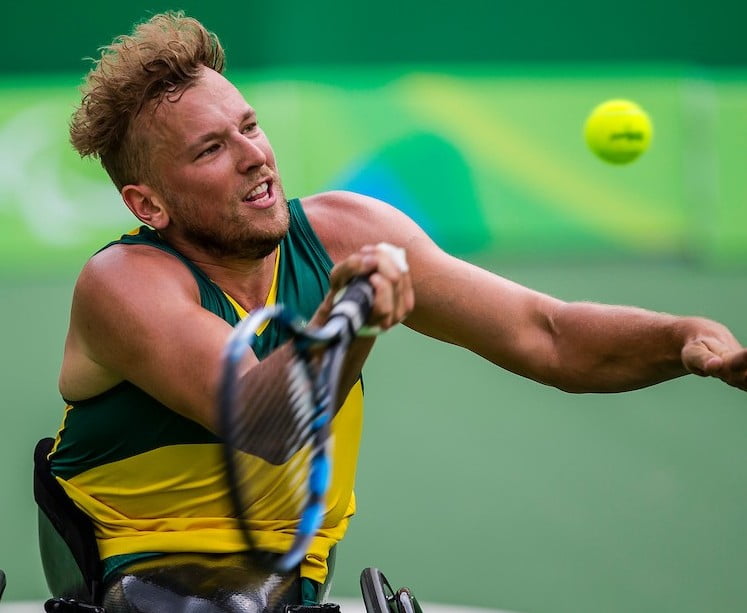 Dylan Alcott has guaranteed himself a shot at a medal in wheelchair tennis at Rio 2016 after recording a comprehensive 6-2 6-0 straight-sets win over American Nicholas Taylor in the quarter finals of the men’s quad singles draw.

Facing an icon of the game – in seven time Paralympian Taylor – Alcott more than justified the hype around his top seed ranking, to record the dominant win in 41 minutes.

Alcott admitted that Taylor’s style had caused some initial concerns, but said he was happy with how he responded.

“It was a bit close early, but I ran away with it in the end which is good.”

The pair couldn’t be split over the first four games in the opening set. It wasn’t until Alcott managed a break of serve that he appeared to relax and step up in class.

The multiple grand slam winner was particularly ruthless on break point opportunities, converting seven of a possible eight, to underpin his dominance.

With a tough match-up looming in the semi finals against South African world number three Lucas Sithole, Alcott conceded his early rounds would count for little if he doesn’t stay on top of his game.

“He’s an unbelievable player, last time we played it was seven and six in the third set so you’ve gotta be on your game for sure,” Alcott said of his opponent.

“I’m feeling really good and I’m enjoying myself. It’s good to have some family and friends here and good support in the crowd, so I’m enjoying it.”

After his heroics in the first round, Heath Davidson was unable to repeat the dose in the quarter finals, losing 6-1 6-2 to Great Britain’s Andy Lapthorne in 52mins.

Six double-faults and a first-serve percentage of 56 restricted Davidson, while Lapthorne was clinical on his ground strokes and passing shots to set up a comfortable straight-sets win, that will see him meet world number two, David Wagner of the USA in the other semi-final.

In the women’s open singles, Sarah Calati’s debut at Paralympic level ended in a 6-0 6-1 defeat to China’s Zhenzhen Zhu.

The Chinese athlete showed astute precision over her less experienced rival, and completed victory in 47mins.