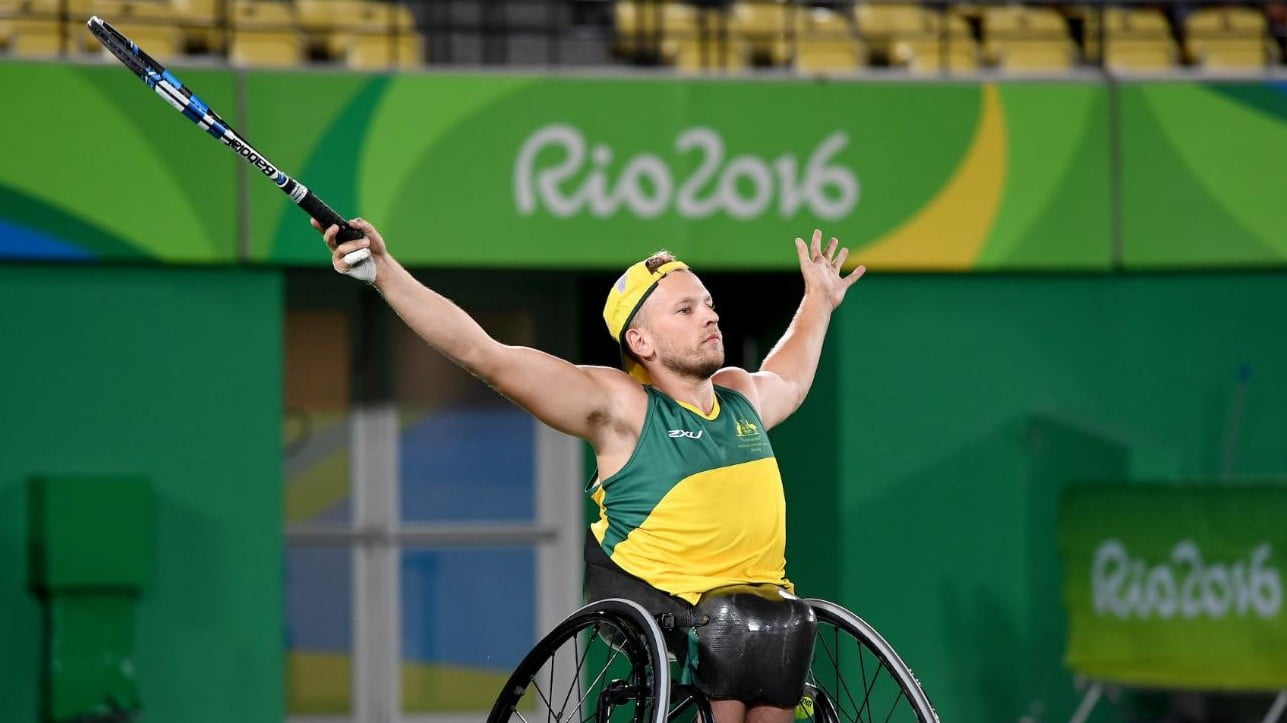 Dylan Alcott has created history on the way to winning gold in the men’s quad singles at Rio 2016, after claiming a straight sets 6-3 6-4 win over Great Britain’s Andy Lapthorne.

The result sees Alcott add a second Paralympic title to his Rio resume after yesterday winning gold in the quad doubles with fellow Australian Heath Davidson. It takes his career tally to four medals, three gold and one silver, after previous successes with the Australian Rollers in Beijing 2008 and London 2012.

The Melbourne athlete was forced to work tirelessly for victory in his singles final, with World Number 4 Lapthorne – backed by a large group of supporters – regularly forcing Alcott to dig deep for points.

The match on centre court lasted 1hr34mins and struck a delicate battle between the serving and ground-stroke prowess of the Australian, versus the measured efficiency of the Brit.

Alcott served at 65 per cent for the match and generated 39 winners to Lapthorne’s 14, while the Brit yielded only 18 unforced errors, to Alcott’s 37 as he persisted with his aggressive approach.

A clearly emotional Alcott said the result had been a weight off his mind, after heading into the campaign as the top ranked player.

“You ask any professional tennis player, able-bodied or not, and they’ll tell you it’s just a relief to be honest,” Alcott said of claiming his title.

“When you think about it everyday, and I go to bed thinking about it, you know what could happen, what happens if you lose, how the match is going to go, so I’ll actually go to sleep a bit easier now,” Alcott added.

Backing up from the doubles victory the day before, Alcott conceded that the three set match had left him feeling fatigued heading into his singles final.

“I actually pulled up average which I was a bit worried about,” Alcott said. “I had physio last night, got up and just felt pretty wrecked to be honest

“I think it was just the emotional roller coaster of the week. But once I got onto the court I felt pretty good, and then I started feeling pretty bad when I thought ‘oh my god I’m going to win’, which is pretty standard and I was pretty proud of myself to pull it out at the end.”

Alcott thanked his coaches, friends and family, but made his biggest statement to the Australians at home living with disability.

“For anybody with a disability, get into sport and get around it, cause it changed my life and for any able-bodied person who hasn’t watched Paralympic sport – you are missing out, because not only are we inspirational, which is what you hear all the time, you can stuff that because we’re entertaining elite athletes and we put on a show,” he said.

Australia closed its campaign in the wheelchair tennis with two gold medals, in the men’s quad singles and quad doubles.