The Australian Gliders women’s wheelchair basketball team will have a new head coach starting immediately with the announcement of David Gould taking over from departed head coach Tom Kyle. 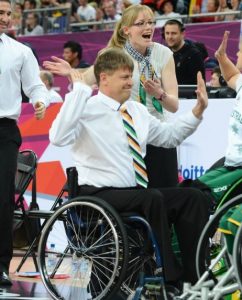 Gould, who hails from Adelaide, has participated in six Paralympics and six World Championship campaigns.

Five of those came as a player while more recently he featured as an assistant coach in London with the silver medal winning Gliders line-up and at the World Championships in Canada in 2014.

He was also an assistant coach as part of the successful bronze medal winning Under-23 men’s Spinners from the 2013 Turkey World Championships.

“I am thrilled and honoured to be named as head coach of the Gliders program,” said Gould.

“This is a program with a great history that has achieved many triumphs and I am looking forward to the challenge of taking these incredible athletes on a journey back to World Championship success.

“We will work hard as one unit to build up our program, and continue to improve the depth of the program and develop the next generation of players.”

Along with Gould’s signings, a number of staff members have been named to compliment his transition into the role.

The women’s team will first get together at Basketball Australia’s Centre of Excellence with a proposed date of October 4-7.