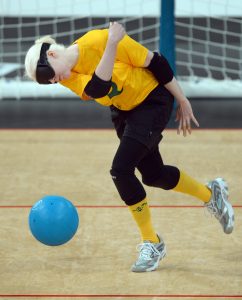 Additional qualification slots have been allocated to Australia in the sports of goalball, athletics and wheelchair tennis.

Chef de Mission of the 2016 Australian Paralympic Team Kate McLoughlin said that although the new allocation was received under difficult circumstances, she was thrilled that more elite Australian athletes would get the opportunity to compete at their respective sport’s pinnacle event.

“The Australian women’s goalball team has achieved some strong results internationally since London 2012 and I’m sure they will grab this opportunity with both hands. We’re also excited to welcome two new members to our athletics team and one to our wheelchair tennis team, all of whom will be making their Paralympic debut,” McLoughlin said.

“While we do feel for members of the Russian Paralympic Team who were not involved in the doping scandal, we support the IPC’s decision to fight against doping in sport and are now looking at the opportunity ahead for these nine athletes.”

Having narrowly missed out the final qualification spot for the Rio Paralympic Games last year, the Australian women’s goalball team are thrilled to be given the opportunity to compete at their second consecutive Games. Spearheading the team will be London 2012 Paralympian and team captain Meica Horsburgh, who will lead fellow London 2012 campaigners Nicole Esdaile, Michelle Rzepecki, Tyan Taylor, Jennifer Blow and Paralympic debutant Raissa Martin.

In addition to the Australian women’s goalball team, Sarah Calati will become the only female in the 2016 Australian Paralympic wheelchair tennis team, while Jesse Wyatt and Tamsin Colley will bring the total number of athletics team members to 46.

Colley will also be the youngest athlete on the entire 2016 Australian Paralympic Team, at the age of 13 and 362 days on the day of the Opening Ceremony.

Speaking on behalf of the Australian women’s goalball team, Horsburgh says she is grateful to be given the spot her team should have received, but knows the team will be at a disadvantage having not maintained the same level of training since last year.

“We have missed out on a big lead up and a lot of the preparation but it really does come down to how you play on the day, and I feel honoured and grateful to be given this opportunity,” Horsburgh said.

“It’s not exactly how I would have imagined qualifying for a Paralympic Games but it is an opportunity that the each athlete on the team will grab with both hands. I believe we have a great team full of athletes who will back each other to the end, and that will be our advantage.”

The Australian women’s goalball team have completed a three-week intensive training course, to give them the best chance possible of success at the Games.

All nine athletes have commenced their final preparations for the Games, and will depart for their respective staging camps this week.

The Opening Ceremony of the Rio 2016 Paralympic Games will be broadcast live on 7TWO at 7am on September 8.