Optus urges Aussies to send a #High5 to the Paralympic Team 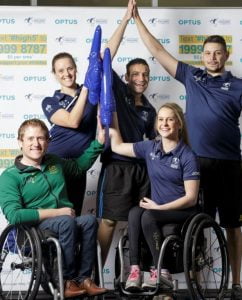 As the official support network of the Australian Paralympic Team, Optus is leading a nation-wide fundraising initiative by asking Aussies to make a $5 donation to send 170 Paralympic athletes from 15 sports to Rio.

The Australian Paralympic Committee requires significant financial support to send the Team to the Rio Paralympic Games, with an average cost of $40,000 per athlete, which covers everything from flights, medical support, equipment and accommodation and more.

Lynne Anderson, Chief Executive Officer, Australian Paralympic Committee is thrilled to have Optus’ support and is encouraging others to help Australian athletes realise their Paralympic dream.

“Every Australian Paralympic athlete heading to Rio has worked relentlessly to rise to the top and represent Australia at the pinnacle event of their sport – the Paralympic Games.

Wheelchair basketballer, Shawn Russell is just one athlete who understands the importance of fundraising to support his dreams.

“It’s been a pretty overwhelming road to Rio, but I’m excited to finally be able to compete in the Paralympics. We’re so grateful for the generous backing of Australians whose support allows us to compete at the Games,” Shawn said.

How can I make a donation?

Text #high5 to 1999 8787 and donate $5 with every SMS. You’ll get a free SMS letting you know your $5 donation has been successful, and you’ll see the charge on your next bill.

Donations are made via Premium SMS, and are available on eligible plans, except Optus prepaid.

Donations will be collected via the Telco Together Foundation’s SMS fundraising program which is supported by Australia’s leading telcos including Optus, Telstra and Vodafone.

To find out more, visit https://www.paralympic.org.au/wp-content/uploads/2016/07/PSMS-DONATIONS.pdf

By Optus and APC Media