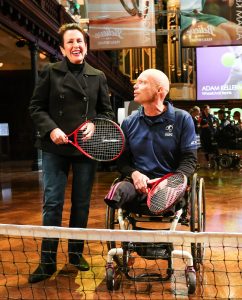 The City is providing more than $100,000 in funding for Australia’s Paralympic and Olympic teams competing in Rio.

The Lord Mayor said the City was “super proud” to support the Paralympic team as they make their final preparations ahead of the Games.

“We are exceptionally proud of our Paralympic and Olympic teams as they head to Rio and compete with top athletes from across the globe,” the Lord Mayor said.

“It’s a tremendous honour for these athletes to represent our country and their community – and a huge achievement simply to be chosen as a representative and have the chance to compete.

“I’m sure Sydneysiders will join me in wishing our athletes well in Rio.”

More than 500 Australian athletes will compete in the 2016 Olympics from 5–21 August and the Paralympics from 7–18 September.

Australian Paralympic Team Chef de Mission, Kate McLoughlin, said: “We are grateful that the City of Sydney is providing this level of support, which we know will make a positive and meaningful impact on our preparations for Rio.”

“Increasing awareness of the contribution and needs of people with disability is an important part of the City’s role in promoting social inclusion and diversity,” the Lord Mayor said.

“And what better way to reinforce these messages than to help support our athletes at the Paralympic Games – one of the greatest platforms for raising awareness of people with disability worldwide.

“The City’s sponsorship of the Team is a wonderful opportunity to profile our athletes, their achievements and their journeys as well as engage them with our broad community.”

By the City of Sydney