The pain of losing the London 2012 gold medal final is what will push the Australian men’s wheelchair basketball team to glory at the Rio 2016 Paralympic Games, according to Rollers captain Brad Ness. 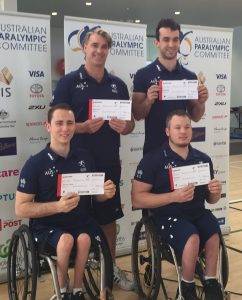 The 12-strong Australian Rollers line-up for Rio 2016 was announced by the Australian Paralympic Committee in Perth today, with Ness revealing his motivation is as strong as ever as prepares for his fifth Paralympic Games.

The Rollers entered London 2012 as the reigning Paralympic and world champions, but were upstaged 64-58 in the final by a Canadian outfit led superbly by powerhouse point-scorer Patrick Anderson (34 points).

“Every time I hear the word London, for whatever reason, it takes me back to that final and it burns,” Ness said.

“I hate the feeling it stirs inside of me, but it has given me motivation to come back and make amends for what happened in the final. We have learnt a lot since then and I’m going to make sure I do everything I can to never have to feel that feeling again, and if that is hunger, then I’m starving.”

The Rollers went on to win the 2014 IWBF World Championship and will again arrive at the Paralympic Games with the rest of the world aiming to dismantle them.

It’s a challenge Ness says his Rollers will relish.

“Once we get to Rio, being back-to-back world champions means nothing,” Ness said.

“Everyone wants a piece of the Rollers, so we will have to be at our ultimate best. We know our best is enough to win gold but each year the bar gets raised so as long as we stick to the process and go about our training at a gold medal standard, then come the medal rounds, we will have put ourselves in a great position to win a gold medal.”

Josh Allison, Adam Deans, Matt McShane, Tom O’Neill-Thorne and Shawn Russell were the five debutants announced today, while Ness will help form the experienced core of the Rollers along with Tristan Knowles and Shaun Norris, both on the verge of their fourth Games.

Brett Stibners and Tige Simmons are the other remaining members of the Rollers side that won the Paralympic gold medal during Beijing 2008, while Jannik Blair and Bill Latham will return after their London 2012 debut.

With the Rollers taking medals from four of the past five Paralympic Games, including gold in 2008 and 1996, Australian Paralympic Team Chef de Mission Kate McLoughlin is hoping the tally can grow further in Rio.

“Australia has a proud history in wheelchair basketball, having competed in the sport since the first Paralympic Games since 1960. More recently, the Rollers have brought Australia a lot of success and have been a benchmark for professionalism and excellence,” Mc Loughlin said.

“We have announced a formidable team, who I’m sure will embrace the responsibility of enhancing the legacy of the Rollers. I can’t wait to see them in action.”

The Australian Rollers will feature in Group A against Canada, Spain, Turkey, Japan and the Netherlands when the Rio Paralympic Games open on September 7.