The Australian Steelers have lifted their world ranking from four to two after claiming the silver medal at the 2016 Canada Cup, the final international wheelchair rugby tournament before the Rio Paralympic Games. 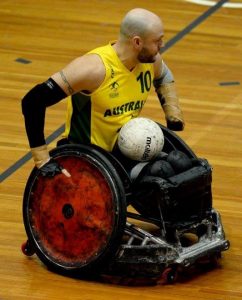 The Steelers defeated Sweden 63-60 in their final match early on Monday morning (AEST), to complete the seven-team round robin tournament with a 5-1 record in Vancouver.

It was the United States who took the bragging rights from Richmond Oval, emerging undefeated from their six matches in a performance headlined by their 60-56 victory over Australia on Sunday.

It proved to be a costly defeat for the Steelers, who were otherwise very impressive in posting victories over host nation Canada (54-43), Japan (63-58), Great Britain (53-47) and Switzerland (61-42) before their three-goal triumph over Sweden.

“Obviously it wasn’t the result we were after. We came here to not lose a game, but looking at the big picture, there have been a lot of positives,” Australian head coach Brad Dubberley said, shortly after the final game.

“We played really well against Canada and Great Britain who we will run in to during the round robin in Rio, and then we were strong against Japan who are also medal contenders.

“It also gave some of newer players like Matt Lewis some good experience, especially against  the USA. They now know more about what to expect later in the year.”

Despite the disappointing loss to Team USA, Dubberley said the Steelers will still bring plenty of confidence home from the tournament.

“We learnt a lot in the game against the USA. We knew that if we held them to under 55 goals and controlled the tempo, that would put us in a good position to win the game but it didn’t happen that way,” Dubberley said.

“They have a couple of new line-ups and a few players have improved out of sight, but that doesn’t scare us. It just means we will look at how we approach things differently.”

The Steelers will now return home to finalise their Rio Paralympic Games preparations, where they will hope to defend the history-making gold medal they won during London 2012.

“It’s all about tidying things up now,” Dubberley said.

“The guys are playing really well but we now need to focus on finetuning our game plans, our tactics and our discipline so by the time we get to Rio, it’s second nature.”

“No doubt about it. Any of those five teams can win on their day,” Dubberley said.