Silver and bronze for Australia at World Rowing Cup 3 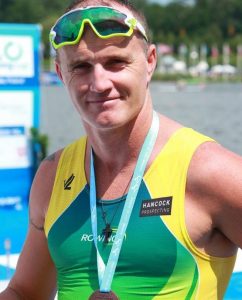 In the Arms and Shoulders Men’s Single Sculls, Horrie was drawn in Lane 2 and took on Igor Bondar and Roman Polianskyi of Ukraine, Tom Aggar of Great Britain, Rene Pereira of Brazil and Fabrizio Caselli of Italy. In extremely fast conditions in Poland, Ukraine’s Bondar shot out the start with team-mate Polianskyi and Australia’s Horrie hot on his heels.

However, Bondar’s fast start meant Horrie was chasing him for the majority of the race and the battle ultimately became between the Penrith-local and Polianskyi for second and third. As they came to the line, it was Bondar who took the win, and a new world record, Polianskyi in second and reigning World Champion, Horrie in third.

Post-race, Horrie said: “I am really happy with this result because the Ukrainians raced really well. Ultimately, everyone is now focussing on is the Paralympic Games, which is the title everyone really wants.”

Meanwhile, World Champions in the TAMix2x, Bellis and Ross were fast out of the start in their A-Final, but faced some stiff competition from France, Netherlands, Brazil, Poland and Ukraine. The Australians were in the lead at the half-way mark, but France and the Netherlands were chasing the Canberra-based crew and margins were close.

As they approached the 750 metre mark the race remained tight and just two and a half lengths separated the field, no matter what, the finish would involve a big sprint. As they approached the line, the French crew of Perle Bouge and Stephane Tardieu made a surge and pulled ahead of the Australians and took the win by just a half-second, while the Netherlands finished in third.

Post-race, Bellis said: “The plan was to go out hard because we haven’t done any races yet this season. We are brushing off the cobwebs. It was a perfect test case before we go back to the cold Australian winter to train ahead of Paralympic selections being announced.”

Photos with thanks to Rowing Australia