A podium finish in sight for vision impaired Perris

Ahead of International Albinism Awareness Day on June 13, Paralympic sprinter Chad Perris has set himself a goal of showing Australia his personal best when he takes to the world stage later this year in Rio. 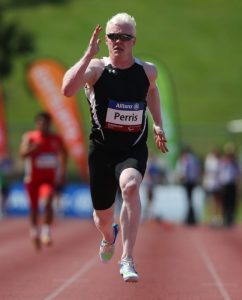 Born with albinism affecting the pigment in his eyes, skin and hair, Perris believes he is on track to secure a personal best time in the 100m and 200m T13 events for athletes with vision impairments, to secure a podium finish at his first Paralympic Games.

“I will have been training for four years for this moment, and being able to show what I can do and what I can achieve at my peak will mean everything,” Perris said.

“Not many people have the opportunity to have all eyeballs on them at a world event like the Paralympics. I’ll have people at home yelling at the TV to cheer me on, and in the stands at Rio. That in itself will be incredible.”

Speaking about International Albinism Awareness Day, he said he also wants to use his time in Rio to help bring awareness and equality to people with albinism.

“Albinism is most definitely something that’s misunderstood. You see, people with albinism are often portrayed negatively in Hollywood, and it has become stereotype.

“Obviously it is a balance, but I do think training outdoors, and even when I compete in a hot, sunny country like Rio, it will help break down those misconceptions.

“I hope that through athletics and my goals, I can try to get people with see those with albinism as equals.”

Having secured silver in the 200m and bronze in the 100m at the 2015 World Championships, a vast improvement since placing fifth at his Worlds debut in 2013, Perris is on an accelerated curve to achieve his goal.

“I’m feeling strong, fast, and extremely confident that I can run as fast, if not faster, than I ever have before,” he said.

Up against the world’s fastest Paralympian, Ireland’s Jason Smyth, Perris is unnerved by the competition to come.

“It will be an extremely tight finish in Rio, a really close race but I have confidence in my body and in what I’m doing,” he said.

“[Smyth] is incredible, and extremely fast, but so is everyone in my class. It was close in Doha, and it will be close again. I think it will be a blanket finish, which will be amazing to be in.”

Training on the Gold Coast under the tutelage of renowned Paralympic track coach Iryna Dvoskina, Perris says he is following a strict regime and is using local competitions as training races to ensure he hits his peak in September.

“I’m running fast up here, but the important thing for me now is to maintain my body condition. It’s feeling really good right now, and I’ve had some really good blocks of training without hassle. I’m trying to do all the little things Iryna is telling me to do to stay injury free, and using this time up on the Gold Coast to get the competition practise.”