Ahead of World Multiple Sclerosis Day on May 25, Australian Paralympian Carol Cooke says she would never go back and change her MS diagnosis, because it has made her into the person she is today. 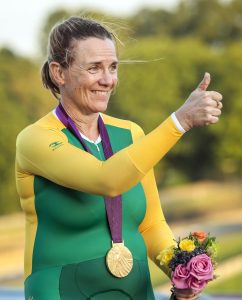 Cooke, who has lived with MS since 1998, is aiming to represent Australia at her second Paralympic Games in Rio this September.

“I would never go back and change the fact that I was diagnosed with MS because it has made me who I am today and given me so many opportunities that I never ever would have had,” Cooke said.

“To me that is independence – to decide what I want to do in sport and with my life, in spite of having a chronic illness.”

In 2016, the theme for World MS Day is ‘Independence’. It will explore how people with MS can be independent, acknowledging that independence can mean different things to different people.

Speaking from Europe where she is currently training and competing, Cooke said: “I think that the biggest problem with MS is that to most people it is invisible.  If someone does not have any outward signs of disability then most people think that they can’t be disabled.

“With MS one of the most common symptoms is fatigue and it can be all encompassing to the point that even after eight hours of sleep you are still fatigued and I mean you can’t get out of bed.

“For me if fatigue hits, it hits hard and I have to stop whatever I am doing or I risk falls or days in bed. There are other symptoms such as neurological pain, bladder and bowel issues which most people won’t talk about, but which can stop you from enjoying everyday life.  I live with all of these symptoms and it is just about managing them to the best that I can.”

With three more major competitions in Europe before her full attention turns to Rio 2016, Cooke said she would love nothing more than to defend her Paralympic gold medal in the T1-T2 road time from London 2012

And based on her recent form, including victories in the women’s road race and time trial at last week’s UCI Road World Cup round in Belgium, her Paralympic title defence is well on track.

“When I was first diagnosed I swore that I would never let MS rule my life and that I would never use a wheelchair or walking aid because I felt like that would be giving in to it.  But when the time came that I needed to use a wheelchair I realised that it was my form of independence because without it I would be stuck in my house.  Also using hand controls in my car and now my walking stick, I realised wasn’t giving in to MS but learning how to live with it so that my independence to continue my life as I wanted to was still there.  I could still go to work, I could still go out with my friends, I could still take the dog out and I could still live.”

“I decided that I wanted to do this with my sport as well by making small adjustments to my equipment or the way I had to train, it was about incorporating MS into my sporting life. Taking Para Cycling was one way to not only keep active (which I believe helps control my MS) but gave me the competition I was looking for.  Some way to push myself to my ‘new’ limits and see where Para sport could take me…talk about Independence, it was up to me how far I wanted to go!”