Strong start for Australia at the 2016 Para-canoe Worlds

Australia has made a strong start to its Paracanoe World Championships campaign in Duisburg, with Curtis McGrath, Amanda Reynolds and Susan Seipel winning their way straight into event finals and every other paddler progressing to the semi-finals. 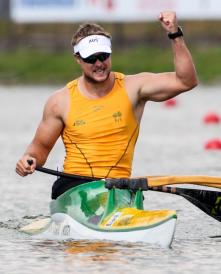 McGrath won heats in both his events, the KL2 200 and the non-Paralympic VL2 200, while Reynolds was untroubled in winning her heat of the KL3 200, an event in which she is the reigning world champion.

Seipel finished second in her heat of the KL2 200.

Reynolds admits she was unsure how she would go, after having her appendix removed just one month ago.

“Mentally it was a success for me, because I had so much time off with my surgery, and then having to get back into the water and say I can still do it, it’s awesome,” she said.

McGrath, Seipel and Reynolds have already earned quotas for Australia at this year’s Paralympics, as has former V8 Supercar driver, Colin Sieders, who finished fourth in his heat of the KL1 200 and progressed to Wednesday night’s semi-finals.

Australia has two athletes competing in Duisburg who are trying to qualify for the Paralympics, and both made positive starts on Tuesday.

Jocelyn Neumueller was fourth in her KL1 200 heat, while Dylan Littlehales was third in his heat of the KL3 200.

Both athletes are into the semi-finals of their events.

Seipel said conditions on the opening day in Duisburg were challenging.

“Being in such cold conditions, I’ve never really paddled in conditions like this before,” she said.

“It’s so cold, and you’re paddling with so many clothes on just to try and keep warm.”