The Australian Steelers will face the toughest test of their Rio 2016 campaign so far in Japan later this month, as they build towards a defence of their Paralympic wheelchair rugby title. 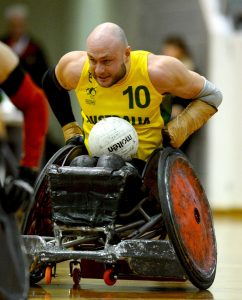 The Steelers will face off against Great Britain, Team USA and Japan at the Four Nations tournament beginning in Chiba, Japan beginning on May 19.

Despite being the reigning Paralympic and world champions, the Steelers are currently ranked number four in the world.

Having not played a major tournament since the Rio test event in February this year, Australian head coach Brad Dubberley says quality court time in Japan could not be more important for his men as the countdown to Rio 2016 approaches the 100 day milestone.

“It’s been frustrating seeing teams like GB and USA play without us, and the boys are looking forward to getting the court time, rather than training and playing against each other,” Dubberley said.

“It will be no easy tournament, but the team is ready,” he said.

Facing world number two Team USA in their first clash, followed by Japan just  hours later on the first day of competition, Dubberley says the main challenge of the tournament will be its intensity.

Seven members of the 12-man squad for this tournament featured in Australia’s gold medal winning performance at London 2012.

“The boys realise the Games aren’t far away and have stepped up. Each of them are contributing to the team, but never before have they played such an intense competition like this,” he said.

“There will be no easy games to get them ready.  It has worked out for them in past competitions, but every game will be full on with minimal rest time.”

Having slipped from the world number one spot to number four in the last 12 months, Dubberley believes his team is more motivated than ever to prove themselves.

Following the tournament in Japan, the Steelers will play their final tournament before Rio from June 21-27 at the Canada Cup in Vancouver.

“We’ve just come out of what was the best camp we’ve had in years. They’re playing at the highest level and are fit and ready to play,” Dubberley said.

“I hate losing any game but it’s been good for our guys not to be going in as world number one.

“We’ve been at nearly every final since Beijing 2008 but having slipped means that the stakes for every competition are higher. All the boys have had to work harder to sharpen their skills.”

“We’re entering Japan, and then Canada and Rio feeling confident.”

The 2016 Japan Four Nations Wheelchair Rugby Championships will be held from Thursday, 19 May – Sunday, 22 May.

The Australian Team for this event includes: