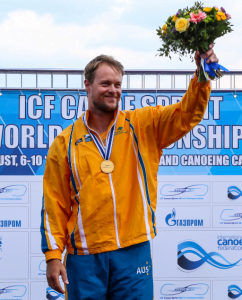 There was also a gold and a bronze medal for Susan Seipel and a silver medal for Amanda Reynolds.

The extra quota positions were earned by 16-year-old Dylan Littlehales in the KL3 200, and by 20-year-old Jocelyn Neumueller in the KL1 200, taking to six the number of Australians who will be competing in paracanoe when the sport makes its Paralympics debut this year.

McGrath will be a medal favourite in Rio after winning the KL2 final, powering home after a poor start to beat Austrian rival and defending world champion, Markus Swoboda, by more than a second.

“I actually slipped on one of my strokes, and Markus shot ahead and that’s when I knew he was going to make me work,” McGrath said.

“I just did what my coaches said, lean in and dig in, and I did that in the end.”

Later in the day McGrath successfully defended his gold medal in the non-Paralympic VL2.

Seipel was also able to defend her gold medal in the non-Paralympic VL2, and also signaled she is a genuine medal prospect with a bronze medal in the KL2 200.

Reynolds was hoping to defend her gold medal in the KL3 200, but had to settle for a close second behind Great Britain’s Anne Dickens.

Colin Sieders finished fourth in his B final of the KL1 200.

Neumueller’s eighth in her KL1 final was enough to earn Australia a place in Rio, an incredible performance from the South Australian after she only took up the sport six months ago.

And 16-year-old Littlehales finished second in the B final of the KL3, which was also good enough to earn a quota.

Littlehales and Neumueller join McGrath, Reynolds, Seipel and Sieders as athletes who have earned Australia positions in Rio.