For Para-canoe young guns, their time is now

The 2016 Para-canoe World Championships begin on Tuesday in Duisburg, and for two young Australians it will be their last chance to qualify for this year’s Rio Paralympics. 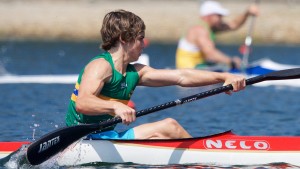 They will be part of a strong Australian contingent in Germany, including four paddlers who have already secured quotas for Duisburg.

Qualifying for the Paralympics will be an incredible achievement for Littlehales and Neumueller, who weren’t even competing in the sport at the time of the last Paralympics in 2012.

Littlehales (KL3) took up the sport two years ago, while Neumueller (KL1) is an even fresher face on the Australian team, having only started paddling seriously less than 12 months ago.

“I began kayaking towards the end of 2015 when I was asked to come and give it a go after a West lakes Canoe Club member saw me at the aquatic centre and thought I had some potential,” Nuemueller said of her introduction to the sport.

“I guess my competitive nature and motivation to always better my own personal times and abilities has been key.

“I did not expect to make the team in my first year to compete at an international level, so that is an epic bonus.”

“When I was young Uncle Mike would take my brother and I for a paddle in his slalom boats,” Littlehales said.

“Uncle Mike was the first one to tell me about the opportunity as a Paralympic sport event starting in Rio 2016 and helped organise my first training boat when I was 14.

“I have been involved in swimming for about five years now and am currently number six in my age group, but now I’m on the paracanoe team, swimming has taken a back seat.”

The 2015 Paracanoe World Championships begin in Duisburg on Tuesday. The full schedule and other event details can be found on the event website.