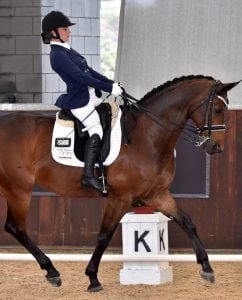 Winner of the Grade 1b was Joann Formosa, the London gold medallist from Victoria, who completed a good test to be rewarded 68.74 per cent riding GB Winchester, Gary Lung’s Hannovarian gelding.

Lisa Martin, from NSW, was competing in her first Sydney CDI as a Para-Equestrian rider and finished with 71.07 per cent with her Hannovarian mare, First Famous, in the Grade IV competition.

“It was First Famous’ second competition in Para-Equestrian and I was really happy with her although I was a bit frustrated with myself today. I thought I had changed a few things but it didn’t come off the way I wanted it.

“The horse itself is just firing, we’re really excited. She has really not long come down from Grand Prix and small tour type of work and it is very tough for her.

Riders will perform their Freestyle tests on Saturday.